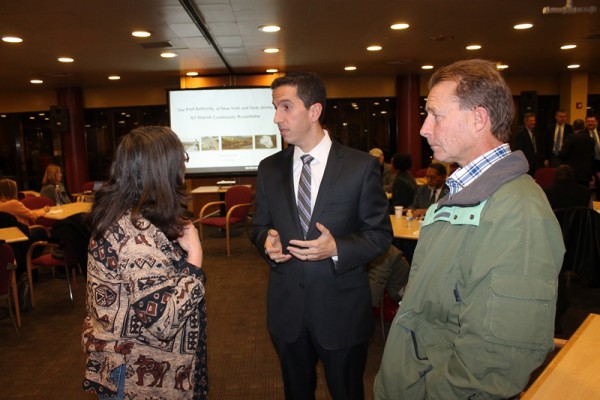 In effort to accurately monitor noise caused by planes flying to and from JFK Airport, Assemblyman Phil Goldfeder (D-Rockaway) has successfully worked with the Port Authority and has secured additional noise monitors in Bayswater and Broad Channel, Queens.
Photo Courtesy of Assemblyman Goldfeders office

In a continuing effort to effectively monitor noise caused by planes flying in and out of JFK Airport, the Port Authority of New York and New Jersey has agreed to install additional sound monitors in Bayswater and Broad Channel, Queens.  Assemblyman Phil Goldfeder (D-Ozone Park) was aggressive in his pursuit of these monitors and wrote a letter to the FAA and Port Authority in September.

Beyond the additional monitors, the Port Authority offers a tracking system on its website, so that residents can monitor the paths of aircraft and see for themselves the specific decibel levels being recorded. It has also increased staffing to handle noise complaints.

“I want to thank the Port Authority for working together with the community to ensure our families are protected from any long-term harm that air traffic may potentially cause,” said Assemblyman Goldfeder. “Installing these noise monitors will go a long way to accurately monitor noise impact on local communities and hopefully lead to relief for our hard-working families.”

At the direction of Governor Cuomo, the Port Authority signed in October an agreement with Environmental Science Associates to conduct federal Part 150 noise compatibility studies for JFK and LaGuardia airports.  The contract will be executed over the next three years, with the goal of outlining procedures to mitigate the noise problem for residents of Queens, Brooklyn, and Nassau Country who live in close proximity to the two major airports.

“Noise monitors are an important component of our efforts to measure aircraft noise in neighborhoods around airports,” said Len Schaier, of quietskies.net.  “The monitors will be used as a check on the Part 150 results to assure that Bayswater and Broad Channel neighborhoods get the study they deserve.”