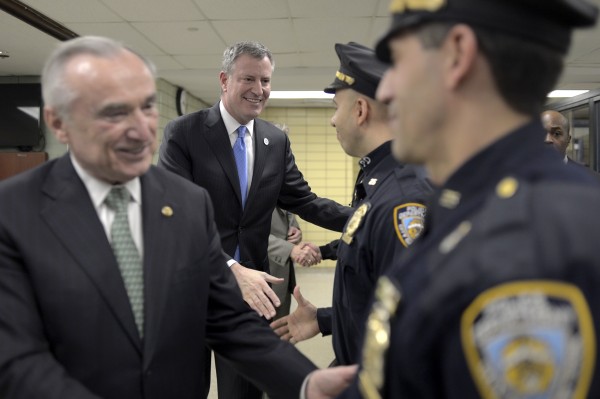 Following his landslide election victory a little over year ago, Mayor Bill de Blasio pledged to improve police-community relations across the city, which he believed had been frayed, in part, by an overzealous Bloomberg administration that relied too much on the tactic known as Stop, Question and Frisk. And De Blasio said he knew the perfect man for the job—former NYPD Commissioner Bill Bratton.

It seems that that choice has paid large dividends in the administration’s first year.

De Blasio and Bratton on Tuesday in Brooklyn announced the city’s latest crime numbers, most notably in the four-month period from August through November, which saw the lowest number of homicides and overall crime since modern crime statistics began in 1993.

“But this administration doesn’t rest on its laurels—we will continue to build on our efforts to strengthen the bond between our police officers and communities they service, working to keep New York the safest big city in the nation,” de Blasio added.

Before launching into more specifics, Bratton thanked de Blasio and the department, adding, “Crime is down and dramatically in many areas—historic lows in many areas. Relationships with the community–certainly we are dealing with some controversial issues this year, but dealing with them successfully and using them as a way of drawing closer to the community rather than drawing apart from it.”

In area precincts—the 102nd and the 106th—overall crime is down slightly, compared to this time last year. In the 102nd, which is composed of Kew Gardens, Richmond Hill, Woodhaven and the northern part of Ozone Park, all major felonies are down significantly compared to this time in 2013, except for grand larceny and car theft, the latter of which is up across the city, as Bratton noted on Tuesday. In the 106th, which covers south Queens communities, including Howard Beach, Lindenwood and Ozone Park, all major felonies are down compared to this time last year, except for reported rapes, grand larceny and, again, car thefts.

De Blasio was effusive in his praise of Bratton on Tuesday: “This is a man who has done more to bring down crime in more places than anyone who’s walked this earth, but he does it with a keen sense of the way forward being with the community—hand-in-hand with the community. He’s shown it works and it’s going to keep working here.”