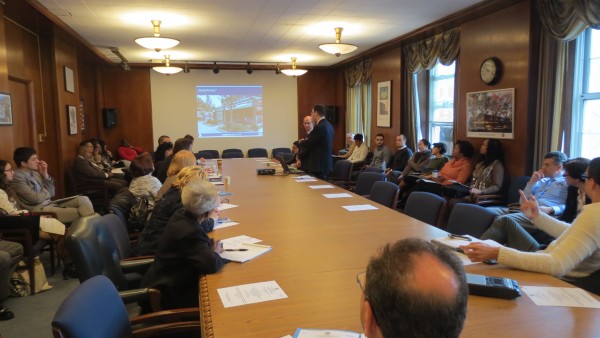 DOT and MTA officials (standing at table) on Tuesday delivered a presentation on Bus Rapid Transit to the Borough Cabinet.
Photo By Michael V. Cusenza

The latest stop for the two agencies tasked with implementing Bus Rapid Transit in communities across the five boroughs was Borough Hall on Tuesday morning, where city Department of Transportation and New York City Transit Authority officials presented the possible plans for BRT along the Cross Bay Boulevard-Woodhaven Boulevard Corridor.

Addressing the Borough Cabinet, Eric Beaton, DOT director of Transit Development, and Robert Thompson, manager of Long-Range Bus Planning at NYCTA, detailed the concept of BRT and how it might work along this specific swath of Queens.

Bus Rapid Transit, known in the Big Apple as Select Bus Service, is a cost-effective approach to transit service that cities use to make riding the bus more like a subway. BRT improves speed, reliability, and passenger comfort and convenience. The first SBS route was launched in the city in 2008, and a total of seven routes now serve commuters in Manhattan, Brooklyn, the Bronx and Staten Island. The Cross Bay-Woodhaven line, which would be based on the existing Q52/53 bus routes, would be the first of its kind in Queens.

Current conditions reveal the reasons why elected officials, including City Councilmen Eric Ulrich (R-Ozone Park) and Donovan Richards (D-Far Rockaway), and civic leaders have been pushing for DOT and MTA to bring SBS to the congested thoroughfares. Buses travel in mixed traffic, while bus stops lack amenities; there is a long pedestrian crossing distance with no refuge across a wide roadway that encourages speeding; both boulevards feature a varying amount of traffic lanes that lack organization; and complex road design and changing service-road patterns make them difficult to navigate.

The agencies have been presenting three proposals or “concepts,” and are asking the civic organizations to vote on them.