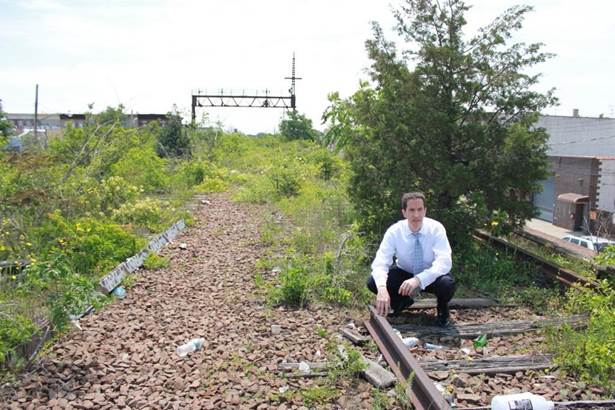 A recently released Metropolitan Transportation Authority Reinvention Commission report calls for the “aggressive expansion” of the city’s rail capacity through means including the reactivation of unused rail rights-of-way.

And Assemblyman Phil Goldfeder (D-Howard Beach) this week seized on the development as support for the reactivation of the abandoned Rockaway Beach Rail Line.

The report recommends seven strategies for improving transportation in the city. Among these is the recommendation for expansion of the existing transit system to meet the needs of growing ridership and create new travel patterns between growing outer-borough neighborhoods under-served by current MTA services. In order to achieve this, the commission recommends taking advantage of unused rail line rights-of-way, such as the Rockaway Beach Rail Line, as a way to quickly add new rail service. According to the report, by increasing capacity, the MTA can also increase resiliency in the face of major storm events, such as Superstorm Sandy, by increasing riders’ transit options when service to lines is down or overburdened.

“Support for reactivation of the rail line continues to grow and this new report drafted by leading transit experts is a huge step in the right direction,” Goldfeder said. “The commission recognizes that reactivating unused rights-of way such as the Rockaway Beach Rail Line is the best and most cost-effective way to improve access to transit for hundreds of thousands of Queens families.”

Before the Thanksgiving holiday, Goldfeder sent a letter to Gov. Andrew Cuomo, urging him to direct a portion of the $5 billion budget surplus, created by settlements and fines from major financial firms, to restore the RBRL.

Two weeks ago, Goldfeder helped detail the findings of a Queens College study that surveyed thousands of residents and researched available census data to gauge the transportation and park needs of Rego Park, Forest Hills, Glendale, Richmond Hill, Woodhaven and Ozone Park—the neighborhoods surrounding the abandoned line. According to the resulting data, “nearly half of all business owners who completed the study said using the rail line right of way for public transit would have a ‘significant positive’ impact on their business.” Additionally, the study found that the reactivated line could generate up to 500,000 rides a day.

In October, Friends of the QueensWay and the Trust for Public Land released the QueensWay Plan, a project that involves converting the RBRL into a $120 million public park boasting trails and many amenities.