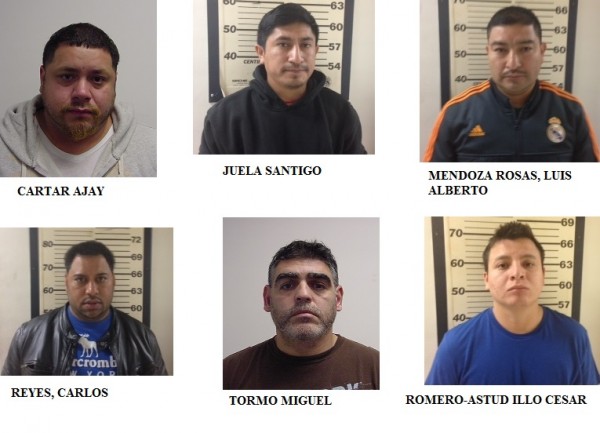 Six of nine suspects who have been indicted and arrested in recent weeks for their alleged involvement in an international drug network stretching from Mexico to the city and Long Island. Ajay Carter (top l.) and Miguel Tormo (bottom c.) are Astoria residents.
Photo Courtesy of Nassau County DA’s Office

Nine defendants from Queens, Brooklyn, the Bronx, Mexico and California have been indicted and arrested in recent weeks as part an ongoing investigation initiated by Nassau County District Attorney Kathleen Rice’s office and conducted jointly with the Nassau County Police Department, the Special Narcotics Prosecutor of New York City, and the U.S. Drug Enforcement Administration’s NY Drug Enforcement Task Force, which consists of the DEA, NYPD and NY State Police.

The network trafficked in several million dollars’ worth of heroin in the New York area, according to Rice, as well as cocaine, ecstasy and steroids sold on Craigslist.

Investigators tracked the source of heroin being sold by two defendants in Nassau back to a drug ring centered on Bronx resident Cesar Romero-Astudillo, who allegedly led efforts that funneled narcotics by vehicles driven from Mexico and inside “mules” flying from California—all destined for the city and Long Island, where heroin use has reached epidemic levels in recent years.

Rice said that in the summer of 2013, investigators found that Ajay Carter, 38, and Miguel Tormo, 42, both of Astoria, allegedly were partners selling heroin via associates in person in the New York area. Carter also sold cocaine, MDMA and steroids through Craigslist. It also is alleged that Tormo met with people associated with Romero-Astudillo to purchase illegal drugs. Four undercover drug purchases totaling one pound of heroin were made from Carter and Tormo at locations in Great Neck and Manhasset on Long Island.

Additionally, in August, Romero-Astudillo instructed two couriers to drive a gray Dodge Durango with fictitious California license plates and a red kayak and bicycles mounted to the exterior to United Body Works, a body shop on 12th Street in Astoria, where investigators believe that heroin was removed from a trap hidden in the vehicle and subsequently diluted and sold to buyers.

“This case proves that the battle lines in our fight to save lives in the midst of a devastating heroin epidemic don’t end at any border. We tracked the supply of narcotics entering our region from the source, and in the process, dismantled a drug trafficking network that stretched from Mexico to New York,” Rice said.