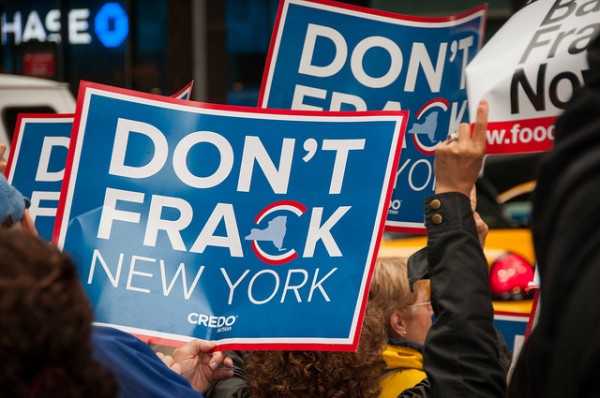 On the one hand, the decision was met with opposition from the energy industry, which posits that New York has lost jobs and money by not joining with neighboring states to drill into Marcellus, a shale rock formation in the eastern United States – one which contains an abundance of natural gas.  The Marcellus shale, which lies between Tennessee and New York, contains about 84 trillion cubic feet of untapped shale gas, with approximately nine trillion in New York.   Compared to neighboring states, New York’s share of shale gas in the formation is relatively small. But environmentalists are generally supportive of the decision, given that extracting and burning the Marcellus gas would release a significant amount of methane emissions, which creates long-term climate impact and could potentially be damaging to public health.

Scientists are divided on the issue, with some supportive of fracking as an alternative to coal dependence.  This point of view considers methane a sort of “gateway” or “bridge” fuel – the idea being that, when used in combination with other alternatives such as solar and wind energies, and as long as leaks can be minimized, natural gas is a viable energy source and reduces our reliance on coal-fired power plants for electricity generation. This may be a hypothetically-based perspective, with research showing that hydraulic fracturing pumps’ efficiencies account for most emissions problems and that, were fuel efficiencies improved, thus would emissions.  Undeniably, fracturing has been known to cause water contamination and radioactive waste, though long-term effects of these incidents on public health are uncertain.

Regardless, the fact that Governor Cuomo based his decision to ban fracking on scientific study is considered a win for scientists who have focused their careers on the study of shale gas development.  According to experts in the field, New York’s influence on federal research decisions means there is a likelihood that the ban will encourage more widespread funding of research on fracking’s impacts.

Locally, the decision was well-received by State Senator Joseph Addabbo, Jr and others. “The more we find out about fracking, the more dangerous we realize it is,” said Addabbo. “We cannot see into the future to predict how fracking would affect the environment, and the potential, irreversible health problems are simply not worth the risk.”

“After years of uncertainty, environmental advocates and everyday New Yorkers alike can now be assured that our water, natural resources, and – most importantly – our health will not be compromised by the rash speculation of the fracking industry,” said Councilman Donovan Richards (D-Laurelton), Chair to the Committee on Environmental Protection.