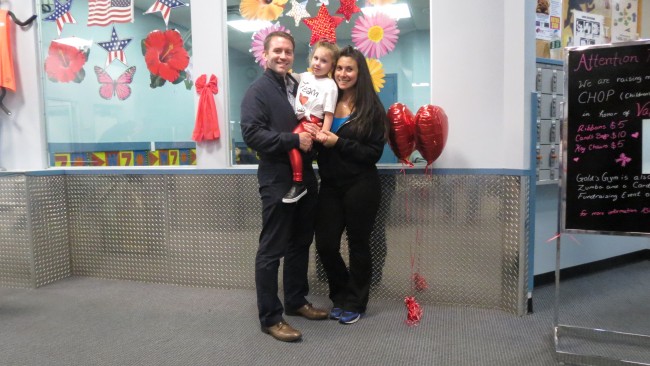 Howard Beach has not forgotten the little girl with the huge heart.

You can still see it in the red balloons and bows, some new, others fading and falling; on the big boulevard and on side streets. You can see it on Facebook and other social media platforms, where words of encouragement and digital tears still flow in posts on pages.

It was evident on Monday night at Gold’s Gym.

Some faces, familiar from her funeral four weeks ago, others new to the cause, donating in Valentina Marie Allen’s name for the first time. To the right, in the spin room, participants embarked on Valentina’s Ride, raising funds for the Children’s Hospital of Philadelphia on stationary bikes. A few feet away, dozens of Zumba enthusiasts, most of them clad in Team Valentina gear, chose the dance-fitness craze to contribute to the CHOP cause. 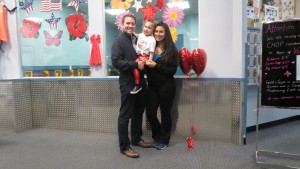 Members of the Howard Beach community on Monday joined the family of Valentina Marie Allen, including mom Danielle, dad Ryan, and older sister Victoria, at Gold’s Gym for a fun fundraiser for the Children’s Hospital of Philadelphia. Valentina ultimately succumbed to her illness there four weeks ago. She was 2. Forum Photo by Michael V. Cusenza

“It makes me so happy that no one is forgetting her,” said Danielle Allen, Valentina’s mother.

Allen also was thrilled to see so many people giving to such a worthy cause.

“When I say they were like family, I mean it,” she said of CHOP and its staff. “Your baby is not just another baby; your baby is theirs. The doctors, the nurses, the surgeons—everybody was just so caring.”

Allen then noted how four staff members from CHOP drove down from Philadelphia that Friday afternoon to attend Valentina’s funeral the following morning.

“To know that that hospital helped them so much, you just want to be a part of something that might help a future family who might have to endure something similar,” said Phyllis Inserillo, who helped organize Monday’s event. “We also want Valentina’s name to be remembered.”

Danielle Allen acknowledged that since her 2-year-old “Valley Girl” passed away on May 12 from hypoplastic left heart syndrome, “some days are worse than others.”

She copes, in part, by focusing on her 3-year-old, Victoria, and the goal of having more children, and raising them in the Howard Beach that her daughter captured with that cherubic smile two years ago and has never let go.

“Valentina was amazing: she was a warrior, she left an imprint on the community and no one will ever forget her,” Danielle said with an indelible smile that instantly reminds you of another one. “I’ll make sure of that.”