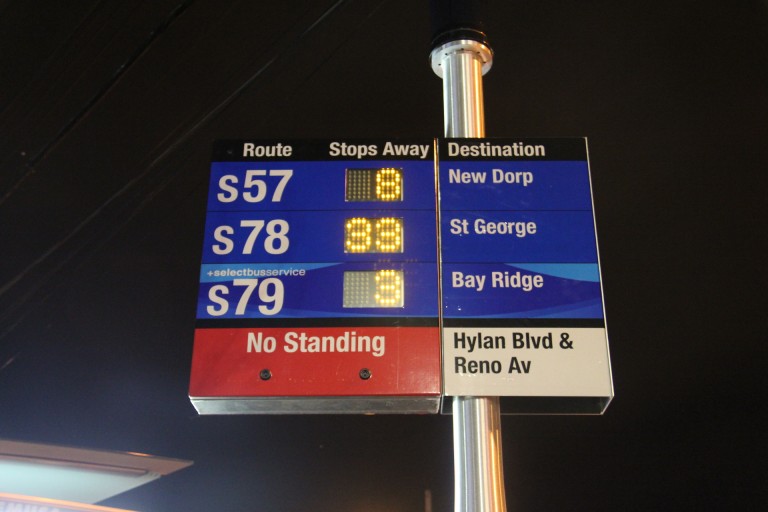 Photo: Bus countdown clocks similar to this one on Staten Island are coming to Queens. Courtesy of GojiMet86/flickr

Real-time countdown clocks will be installed by 2017 at 10 of Queens’ busiest bus stops, according to Borough President Melinda Katz.

The clocks were purchased through an allocation of $200,000 of the Borough President’s Office’s Fiscal Year 2016 discretionary capital funds to the city Department of Transportation.

The DOT, which manages the physical infrastructure of bus stops, is in the process of analyzing stops in Queens and citywide to determine locations that would benefit the most from the real-time passenger information signs. Factors that inform this process, Katz said, include ridership levels, the number of bus-to-bus and bus-to-subway transfers, proximity to key facilities (hospitals, schools and senior centers) and the surrounding neighborhood’s level of dependency on bus service. Bus stops are also being evaluated based on feasibility constraints at the potential installation sites.

The final locations for the 10 bus countdown clocks will be determined in consultation with Katz and the Metropolitan Transportation Authority New York City Transit. The estimated cost per countdown clock is approximately $20,000, although the actual cost may vary depending on terms of the contract award and individual site conditions. The clocks are projected to be installed and activated in 2017.