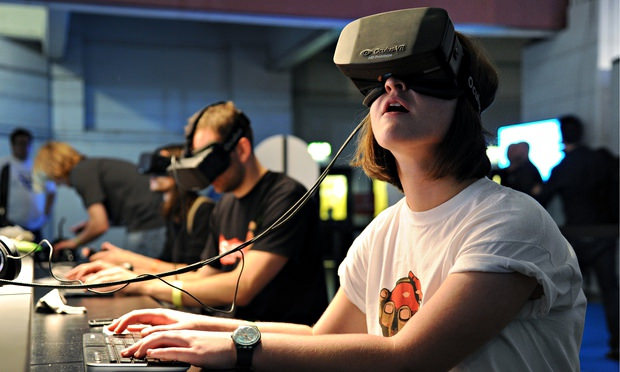 Photo: The Sensory Stories exhibit at the Museum of the Moving Image in Astoria features multiple installations using the Oculus Rift, a device (shown here) which places the user in a virtual environment. Courtesy of Faizan Hassan, Flickr.com

IPads, virtual reality, and the Google Cube are the new face of storytelling; interactive storytelling that is. At the Museum of the Moving Image in Astoria, a “Sensory Stories” exhibit currently features 13 installations ranging in levels of interactivity, including four that use the Oculus Rift virtual reality goggles.

At a “Storytelling Renaissance” panel to discuss the installations last week, exhibit contributors shared their perspectives on the unique show that merges various forms of art and technology.

“This show is really about how technology is bringing us back into our bodies, enabling us to have multi-sensory experiences and [technology] that lets us participate and be active in our narratives,” said Charlie Melcher, founder of The Future of Storytelling Summit.

One installation, “Clouds over Sidra,” leads the viewer through a refugee camp in Jordan while following a 12-year-old who lives in the camp.

“We saw, not the [gaming] potential in [Virtual Reality], but the potential for storytelling; for stories to resonate with the viewer in very different ways than movies do,” said Saschka Unsled, creative director of Oculus Story Studio.

Navid Khonsari, co-creator of 1979 Revolution, an iPad game featured in the exhibit, said the game came about from a desire to “define a new genre.” He said his company Ink Studios wants the story to dictate the medium it is presented in. The game is a “choose your own adventure” following a photojournalist in Tehran during the 1979 Iranian Revolution. It gives players four possible reactions each time the protagonist is faced with a decision.

“Nothing sticks with you as much as actually being in somebody else’s shoes for that one day,” said Khonsari.

Ink Studios combined the artistic style of graphic novels, the storytelling of documentaries, and the interactivity of a game in order to tell the story of the revolution. The game includes audio recordings and photos of the events.

Most of the installations run on an iPad. One app, John Lennon: The Bermuda Tapes, features audio recordings about Lennon’s sailing trip to Bermuda. It puts the user behind the helm of the ship in the middle of a storm and leads them through snippets of Bermuda while hearing about his recharged inspiration and conversation with Yoko Ono through songs.

Yoni Bloch, a musician from Israel, has created interactive music videos with his band. At different points in the video, viewers are asked to make a choice of which character to follow, whether to switch to the acoustic version or which band member they want to hear a solo from.

Bloch said he was surprised when viewers began recording the version of the video they saw and posting them in the comments section. One of his videos has 256 different combinations, and he said it was interesting to see the viewers interact with one another as well as the video itself.

“Giving me a feeling of being a participant in the story keeps me in, keeps me engaged,” Bloch said.

But interactive storytelling has been met with criticism by some who say it pulls people out of the story.

“Depending on where people come from that you talk to, they complain about different things that are broken once you add interactivity,” said Unsled. “If you talk to people from film, they’re like ‘All these things from film don’t work anymore’ and yes if you would do a film, then it would be broken, but you’re not doing a film.”