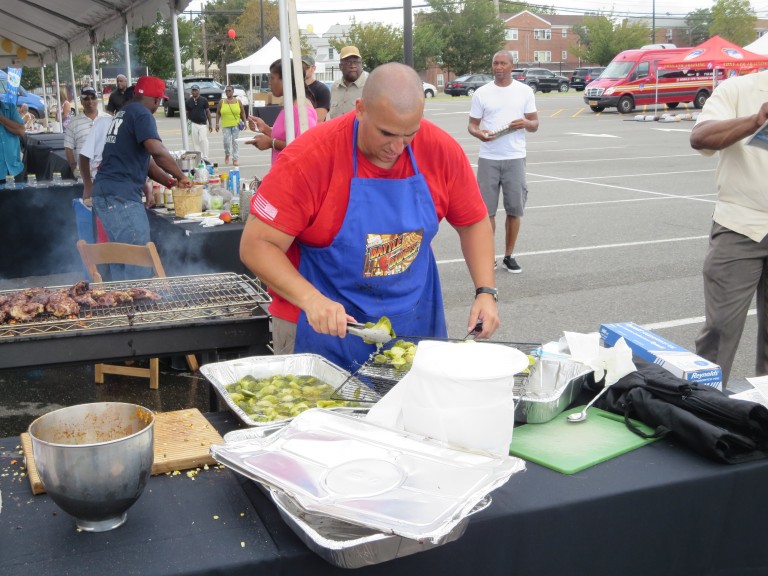 PHOTO:  Chris McGuinness last weekend took a respite from the streets and his Brooklyn South Narcotics assignment to help represent the NYPD in the Battle of the Badges Cook-Off at Resorts World NYC.  Forum Photo by Alan Krawitz

Hosted by Ray Cooney, a former FDNY firefighter and host of PBS’s “Firehouse Kitchen,” the casino’s first-ever, free and open-to-the-public event featured 10 members of both the FDNY and the NYPD facing off to test their culinary skills in front of a panel of notable judges, which included Borough President Melinda Katz; Cedric Dew, executive director of the Jamaica YMCA; and Deputy Inspector Matthew Galvin French, a Culinary Institute graduate who has appeared on cooking shows alongside Bobby Flay and Rachael Ray.

“This is my first competition, but I’ve been making this recipe forever,” he said. “Win or lose, this whole competition is not really any type of rivalry but it is fun!”

Dew called the event a “wonderful way for police and firefighters to help build strong relations with the community.”

Jing Xong, with the FDNY’s Hazmat Tactical Battalion in Flushing, also agreed that the contest was lots of fun as he perfected his recipe for miso-glazed pork belly with pickled red onion slaw.

“It’s really good to be out here, it definitely beats working,” he said, adding that “It would be nice to win this thing for the FDNY.”

And, with the smell of exotic—nearly intoxicating—barbeque dishes wafting through the air, Cooney remarked that all the plates “looked great,” and that he would love to have all the FDNY and NYPD competitors as guests on his show.

“You guys are all welcome to come on,” he said, which received a big round of applause from the audience. “The cook-off between cops and firefighters is a great rivalry.”

Scott Molina, chief operating officer for Resorts World NYC, said he was pleased with the battle, despite a fairly light turnout.

“This was the first year for this event and we expect that the second year should be much more successful,” he said.

After the panel of judges returned with their scores, FDNY’s Khalid Baylor, of Ladder Co. 14, captured the top spot for his recipe for Tennessee honey apple ribs, taking first place and nabbing a trip to Resorts World Bimini in the Bahamas.

NYPD Bomb Squad veteran Richard Henderson took second place and won a Weber grill for his rendition of chicken scarpariello; and coming in third was NYPD Highway Patrolman Edward Behringer, for his grilled Cajun-spiced fillet of red snapper with pineapple salsa, basmati rice, sautéed escarole and grilled scallions. He earned a $500 gift certificate for his efforts.
Mildred Ramos, who lives across the street from Resorts World, said she was a fan of the cook-off competition.

“For the community, this is very nice,” she said. “I didn’t know this was going on beforehand, but I’m glad it’s here.”