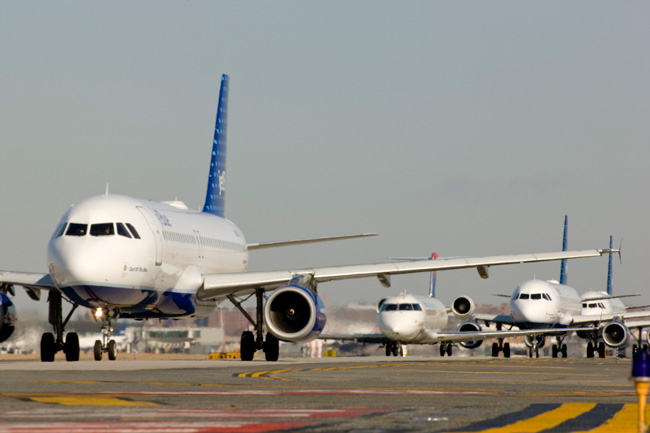 PHOTO:  The much-anticipated completion of the renovation of JFK Airport Runway 4L-22R is just days away, according to Sen. Addabbo. Photo Courtesy of The Port Authority of New York and New Jersey

File this one under “Good News for Sore Ears.”

The reconstruction and rehabilitation of Runway 4L-22R at John F. Kennedy International Airport will be completed in a matter of days, according to an elected official who spoke to Port Authority of New York and New Jersey representatives this week.

State Sen. Joe Addabbo, Jr. (D-Howard Beach) announced on Tuesday that the lengthy enterprise is expected to come to an end on Monday, Sept. 21.

Runway 4L-22R is a parallel runway that runs in a northeast-southwest direction on the eastern side of JFK, measures 11,351 feet long by 150 feet wide and handles about 25 percent of the airport operations annually.

The project, which was conducted by the Port Authority in three stages, added more than 700 feet of runway pavement; widened the runway from 150 to 200 feet to accept new, larger aircraft; allowed for the construction of high-speed taxiways as well as new taxiway exits; and replaced outdated navigation and communication equipment.

The high-speed taxiways will help aircraft landing at JFK Airport exit the runway faster. This will allow the Federal Aviation Administration to utilize the airfield more efficiently to reduce delays, the Port Authority said.

The runway project, which began earlier this year, impacted the quality of life of thousands of southern Queens residents who had to endure a tremendous increase in plane traffic over their homes from redirected aircraft.

“Obviously, maintaining an airport can sometimes require lengthy construction projects that have unfortunate repercussions on the neighboring communities,” Addabbo said. “That is certainly the case with the project to rehabilitate Runway 4L-22R. While I welcome these improvements that will increase the safety of air flight at JFK, I am thrilled to finally see the end to a project that has wreaked havoc on my constituents. The redirecting of flights every couple of minutes every day for several months has pummeled this community with an unsafe and unhealthy amount of airplane noise and pollution, and I look forward to a large portion of that being eased when construction wraps up next week.”

Joann Ariola, president of the Howard Beach-Lindenwood Civic Association, said, “This is an announcement that the residents of Howard Beach were skeptical would ever arrive. Now that it has, let’s hope the increased flights going overhead are decreased, noise levels are less and aircraft approach is at a higher altitude.”

Community Board 10 Chairwoman Betty Braton also noted that the completion of construction “will be welcome for all of our residents who have unfortunately had a noisier than usual year.”

The Port Authority did not return a request seeking comment.

According to the agency, the $292 million reconstruction and rehabilitation contract was funded by the agency. The project was to have had a positive effect on the regional economy, with the creation of more than 2,460 jobs, $147 million in wages, and nearly $712 million in economic activity.