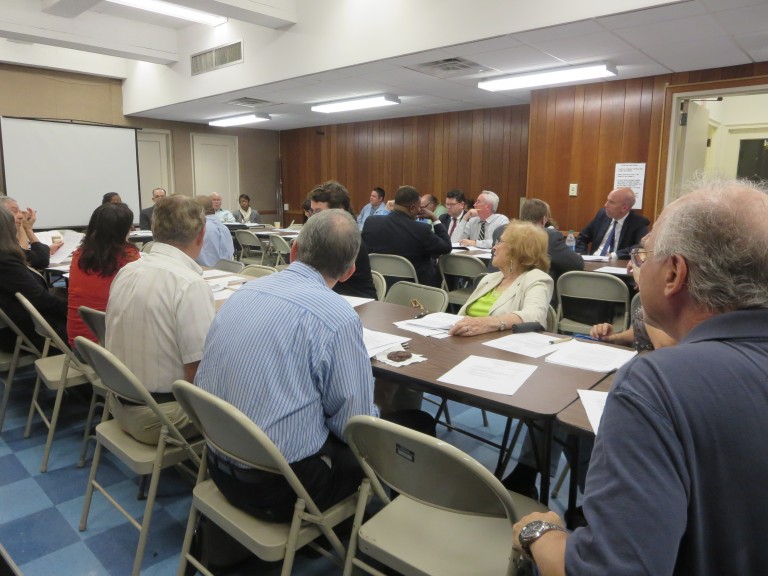 The stated mission of the New York Community Aviation Roundtable is to tackle neighborhood concerns that stem from the operation of both LaGuardia and John F. Kennedy International airports from increasing jet noise to air pollution and other transit hub-related issues.

However, going back to April’s meeting at York College in Jamaica, the structure and governance of the voluntary, advisory group has been mired in debate about everything from exactly who would participate in the various airport committees, whether there should be a separate roundtable for each airport and where power would be concentrated and which members should hold such power.

Tuesday’ meeting at Queens Borough Hall was a continuation of that debate over organization and bylaws of the roundtable, which is comprised of one New York Airports Community Roundtable with two separate airport committees: one for JFK and one for LaGuardia.

Previously, it was resolved that each airport committee would have 32 voting members representing communities affected by each airport. The combined membership would vote for an executive committee, which would be tasked with developing and approving roundtable bylaws. Committee members would also vote on the adoption of bylaws.

Each airport committee includes seats for lawmakers, community board members, airlines, city agencies and the airports themselves, but no representation for civic groups.

In addition, the Port Authority of New York and New Jersey and the Federal Aviation Administration will attend committee meetings as well as executive committee sessions and serve as advisors, but will not vote.

Barbara Brown, chairwoman of the roundtable who also leads the Eastern Queens Alliance, an advocacy group that supports separate roundtables, criticized a dearth of representation from “regular folks” as well as civic groups.

That lack of structure is largely due to the roundtable’s inability to agree on the ratification of bylaws which stipulate basic rules, including the frequency of meetings to voting procedures, election of officers and more.

Richard Hellenbrecht, secretary of the roundtable and former member of the Queens Civic Congress, advocated for a roundtable spokesperson to liaison with government officials as well as the media.

“There should be one person who can speak on behalf of the roundtable, to communicate our positions effectively,” Hellenbrecht said.

Another issue discussed was whether or not there should be members appointed to interface with the airport committees, or to simply include officers from each airport committee on the coordinating committee, to essentially referee what happens between the two LGA and JFK committees.

In an informal vote, that idea was approved.

“I see the airport roundtable as a union of the two airport committees, not a separate entity,” Brown added.

The next airport roundtable meeting is scheduled for Nov. 17.