PHOTO:  The festive kickoff of Queens Restaurant Week was enjoyed by nearly 300 guests, many of whom sampled full plates of food from local restaurants like Connolly’s Corner in Maspeth.  Forum Photo by Eugénie Bisulco

Queens Restaurant Week, a program of the Queens Tourism Council, is set this year for Oct. 12-23. More than 200 restaurants will participate in the 12th annual event by offering prix fixe dinners and lunches, most of which will be $28 and $14, respectively, and will be three courses.

This week the annual event was kicked off at The Shops at Atlas Park in Glendale, where five eateries and Queens Brewery gave away free samples of their food and beverages to 300 attendees, most of whom happened by during a regular shopping trip. Some of the restaurants, such as Shiro of Japan, whose chef prepared tuna, salmon, and vegetarian sushi, gave out small portions, while others dished out full meals. Connolly’s Corner’s spread offered a full hot service, with catering trays full of lobster ravioli, calamari, roast beef, baked salmon, and ribs. Lines were wrapped around the outdoor Atlas Common area, particularly when Queens Brewery of Ridgewood started serving up full pints.

“Best beer in town!” shouted one dapper older gentleman, as lumberjack/hipster-looking founder Nelson Rockefeller (yes, his real name) chatted with the crowd. To Rockefeller’s credit, he stopped two underage women who were actually on line for the nearby Vintage Curry of Jamaica. The Curry shop, which just opened recently, gave out delicious chicken tikka, vegetable samosas, shish kebobs, and other traditional Indian dishes, though the menu also includes some Chinese food.

Rodis Santiago, 35, of Jamaica, didn’t know anything about Restaurant Week, but was shopping at the mall when someone told her to check out the kick-off. “If I like the food today, sure, I’ll try something during Restaurant Week,” she said.

Ashley Ortoneda, 19, of Maspeth, had never even seen Connolly’s Corner, but vowed to go after she tried the food. “It’s on Grand Avenue, so I can take my mom there,” she said. She was with her friend Shelby Gashi, 18.

“I’m definitely planning to go back to Connolly’s,” said Gashi. “I love the lobster ravioli.” 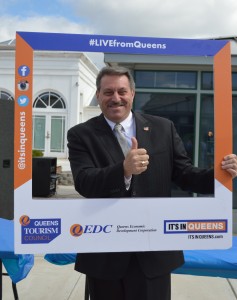 According to the Queens Tourism council, the Borough is “so cuisine heavy that diners need more than a week” to really take advantage of the promotion. (New York City Restaurant Week, a separate venture, lasted over three weeks this summer and featured more than 350 participating restaurants.)

State Senator Joe Addabbo, Jr. (D-Howard Beach) dropped by Monday’s kickoff to support local businesses and the Tourism Council, calling it a “win-win-win” for all involved.

Considering the significant savings the promotion offers to restaurant patrons, it’s certainly a win for them, if the food is good – and if they arrive hungry. At Connolly’s Corner, the Atlantic Salmon – one of the prix fixe entrée choices – would normally cost $21.95. During Restaurant Week, you can get that, plus an appetizer and dessert, for only $6 more.

Queens Restaurant Week will go from Oct. 12-23, though some restaurants are extending the sale. For a full list of participating establishments, go to itsinqueens.com/RestaurantWeek.