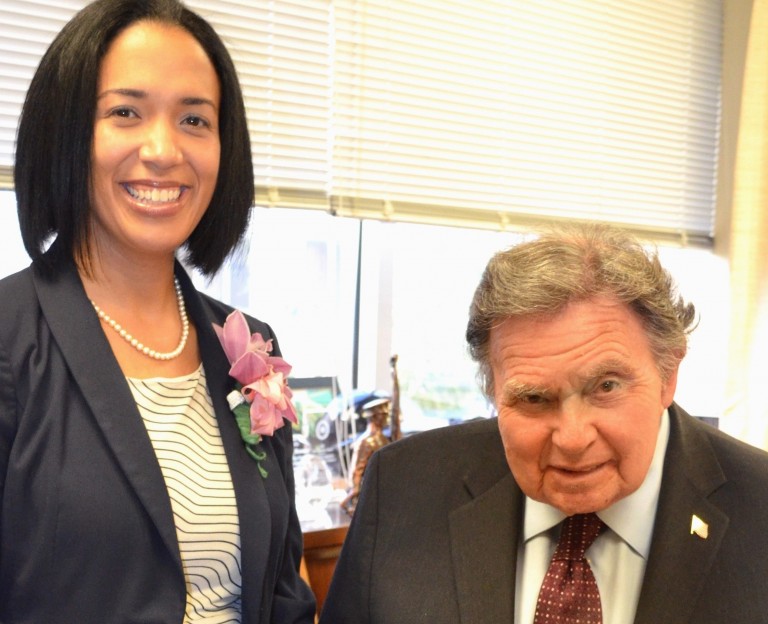 Queens County Women’s Bar Association President Lourdes Ventura has been named the recipient of the District Attorney’s 2015 Hispanic Heritage Award “for her dedication to the Queens community, her outstanding accomplishments, and her tireless leadership as the first Latina president” of the QCWBA, Queens DA Richard Brown announced last week.

Brown presented the 10th annual award last Thursday to Ventura, a senior associate at Ahmuty, Demers & McManus, at a reception in his Kew Gardens office.

“It is truly a pleasure and an honor to pay tribute to Lourdes Ventura,” Brown said. “A talented and skilled lawyer, she started her professional career in my office as an assistant district attorney. Today she is a remarkable leader who has dedicated her professional life to helping others using the power and ethics of the law. Ms. Ventura is a trailblazer, who received a master’s in social work and a law degree at the same time. Throughout her career she has used her knowledge in both fields to assist others while also paving new paths for Latinos and women alike.”

The daughter of Dominican immigrants and the oldest of three children, Ventura grew up in Corona. As a first-grader struggled in school—even though she was born in New York City, she did not speak English.

It wasn’t long, however, before Ventura was translating English to Spanish for her mother and others. At first she saw it as an obligation, but after a while there was a spark that generated a desire to be that person that others could depend on for help, according to Brown’s office.

After four years investigating and prosecuting drug cases, economic fraud and various street crimes, Ventura moved on to join the Civil Rights Bureau of the state Attorney General’s Office. As an assistant attorney general, Ventura prosecuted cases involving discrimination in housing, education and other areas where people of color were impacted in a negative and possibly illegal way.

“Queens County – the most diverse county in the nation – has a large and ever-growing Latino population. It is a population that enriches every aspect of life in our county and adds to its vibrancy and vitality,” Brown added. “We have this special gathering to honor those of Hispanic descent who exemplify the values of leadership, public service and commitment to excellence.”