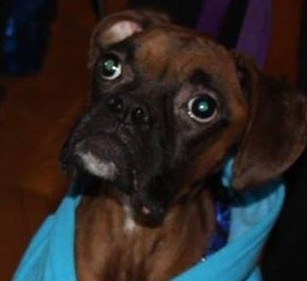 PHOTO: ​Brewster is on the road to recovery.​ Photo Courtesy of Facebook/Amy Swift

A Ridgewood man who brought a starving boxer that he had purportedly found lying in a park to a city shelter two weeks ago has been charged with animal cruelty and other offenses after it was determined that he was actually the dog’s owner and had failed to properly care for or feed the pet, according to Queens District Attorney Richard Brown.

Anthony Esteves, 25, was arraigned last week on a criminal complaint charging him with aggravated cruelty to animals, first-degree falsifying business records and two counts of overdriving, torturing and injuring animals; failure to provide sustenance. Esteves, who faces up to four years in prison if convicted, was released on his own recognizance and ordered to return to court on Dec. 15.

According to the charges, Esteves brought a boxer breed dog to an Animal Care and Control shelter on Queens Boulevard on the afternoon of Oct. 13. Esteves allegedly said that he had found the dog lying in a park, and when asked by shelter employees for his home address he provided a false one. According to ACC records, the condition of the dog was recorded in the case file as “ . . .  not enough energy to walk . . .  after dog left there were blood stains in the kennel.” Esteves allegedly stated at first that if the dog healed he wanted to adopt it; however he later retracted his alleged interest in adopting the dog.

According to the charges, the dog, since dubbed “Brewster,” weighed only 25 pounds, and its condition was very acute in terms of being emaciated and skeletal when it was brought to the shelter. Based on its bone structure and height, the dog should have had a weight range of about 60 to 65 pounds.

When the city Police Department received an inquiry from the New York Daily News about the boxer, an investigation was commenced by the NYPD’s nascent Animal Cruelty Investigation Squad, which allegedly revealed that Esteves had provided ACC authorities with a false address – one next door to where he actually lived. When interviewed by authorities at his residence on Oct. 19, Esteves allegedly provided various stories about who the dog belonged to and how he had obtained the dog before finally admitting that the dog was his and that he did not want the dog to die in his bedroom.

When Esteves was taken into custody, he allegedly continued to provide authorities with various explanations as to how he had obtained the dog and why the dog was undernourished. On the evening of Oct. 19, a court-authorized search warrant was executed on Esteves’ Metropolitan Avenue residence.  Among the items allegedly recovered was a dog’s food dish which contained Esteves’ personal items from the top of a dresser and which did not fit the dog bowl stand in the room. There were allegedly no receipts for dog food, veterinary care, dietary supplements for dogs nor was there any dog food anywhere in the house, nor evidence of dog food ever having been in the house.

Based on the “Purina Scale,” which runs from level one (very emaciated) to level nine (very obese), with level five defined as being healthy and hale, Brewster was rated level one by an American Society for the Prevention of Cruelty to Animals forensic veterinarian one week after being surrendered by Esteves.  The veterinarian allegedly stated that it would take weeks, if not months, for a dog of such size to be assessed at level one if the dog had started out as healthy.

Brown said that Esteves “is accused of showing a complete disregard for the wellbeing of this helpless animal when he failed to provide the basic necessities required to maintain the animal’s health.”