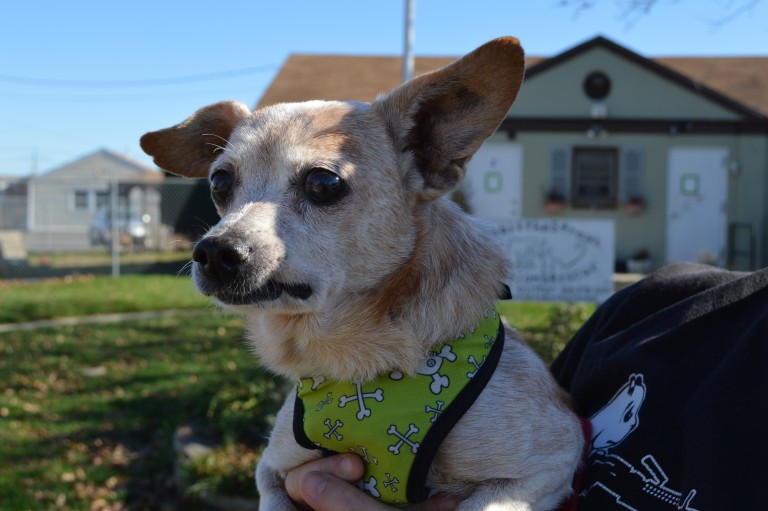 PHOTO:  Kilter is 11 years old, an age well beyond what many shelters will take.  This sweet dog is adoptable today from Bobbi and the Strays.  Forum Photo by Eugénie Bisulco

Saving the world – animal by animal – is one time-consuming occupation.

Bobbi Giordano, of all people, knows this firsthand. She starts every day early – before 7 am – and is off and running to one of two Bobbi and the Strays no-kill shelters she operates, or to do a home visit or follow up with the fundraising necessary to successfully manage this not-for-profit business.

Giordano, 70, who currently has three dogs of her own at home, has helped thousands of animals since her first rescue of kittens when she was just nine years old. With a network of veterinarians and other friends like the local ASPCA, she’s determined to accept ailing and elderly animals, sometimes dogs as old as 17 or 18.

“We don’t put them to sleep; we fix them,” Giordano said solemnly. One of those older dogs is in her own personal care at home.

Mallgoers at the Atlas Shops in Glendale might at first be taken aback to see a fully operational animal shelter at the shopping center’s Cooper Avenue entrance. Shade your eyes to peer through the huge plate glass windows and you’ll see peering back at you the faces of some 20-odd dogs and cats, whose cages face the bright windows. Walk in and a clamor occurs; the animals are just that excited to see their Bobbi, who tends to give out delectable-looking morsels of chicken — and plenty of kisses. Giordano says she is incredibly lucky to have this space donated by its generous owners.

And it does get a lot of traffic. Tara Powers, a dog attendant dressed in pink scrubs and fingerless mittens, remarked about the frequency of visitors. 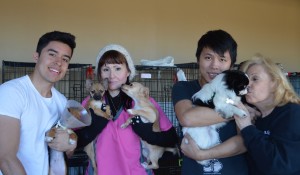 Bobbi (pictured, far right) and the staff and interns at her Atlas Shops shelter care deeply for the twenty or so pets available every day at the Glendale location. Forum Photo by Eugénie Bisulco

“I’ve only been here about six weeks, and four or five dogs – and three cats – got adopted already. Turnover is really good,” said Powers, a South Ozone Park resident. Stats on a recent month’s adoption report agree: 25 dogs and 13 cats adopted, in total, from both locations.

But people walking in shouldn’t expect to walk out with a new pet right away. There is a process, taking as little as a day, which includes an application, a fee to cover vaccines and spaying/neutering, and a home visit. Bobbi and the Strays will not give you an animal you are ill-prepared to care for, no matter how much love you have to provide it.

And apparently it takes a village – or an army – to manage everything. Elyse D’Agostino, who heads up the shelter in Freeport, calls their volunteers, who put in as many as 50 hours a week, “the best in the world.” 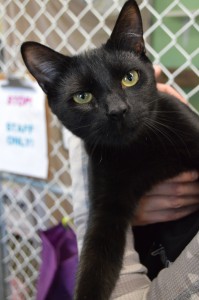 Superstitious pet adopters steer clear of beautiful cats like this one, confounding color-blind shelter staff desperate to find them homes. Black cats are usually sought out during Halloween season, when shelters such as Bobbi and the Strays hold firm to a no-black-cats adoption policy, in fear of less than honorable intentions. Forum Photo by Eugénie Bisulco

D’Agostino also shed some light on the sad fact that black animals are underadopted, calling it a “sort of racism” based on some visitors’ belief in “witchcraft.” An entire litter of stunning, healthy black kittens the shelter took in April has yet to be adopted.

When an animal is adopted, cage space – a valuable commodity in the mall shop, particularly – becomes available, and it is filled immediately, usually by reviewing a “euthanasia list” that rescue operations – as well as the general public — can access. Those on death row receive their shelter pardon often with very little time to spare.

“It truly is their second chance,” said Andrea, the Atlas location’s manager, who has been helping Giordano for 15 years. “The City puts down 200 animals a day.” For those who are adopted, “I think they know you saved them.”

Andrea tries to remain aloof so that she can focus on getting a malnourished or sick animal seen by a vet. “But it’s hard to separate your personal love for them when they come in so neglected.”

She also spoke of the increasing number of purebreds in shelters, due to the prevalence of breeders who continue to overpopulate the animal world, the pet owners who buy without fully realizing the commitment involved then must give up their animals, or the lack of education on the importance of spaying and neutering.

“People shouldn’t sell pit bulls that haven’t been spayed or neutered,” said Andrea. “They’re a great breed, so loyal, but they are dying at an alarming rate.” The Atlas location can only take one at a time, and “96% of dogs on the euthanasia list are pit bulls.”

Andrea and the whole network that works for Bobbi and the Strays wear their hearts on their sleeves, all with a deep abiding passion to somehow make things better for our furry, four-footed friends.

“You can’t save the world, but you can definitely make a difference,” she said.

To make your own difference and adopt a pet from Bobbi and the Strays, visit the Glendale shelter at 80-36 Cooper Avenue or their website at bobbiandthestrays.org. For continuing coverage of local animal allies, stay tuned for next week’s issue of The Forum.