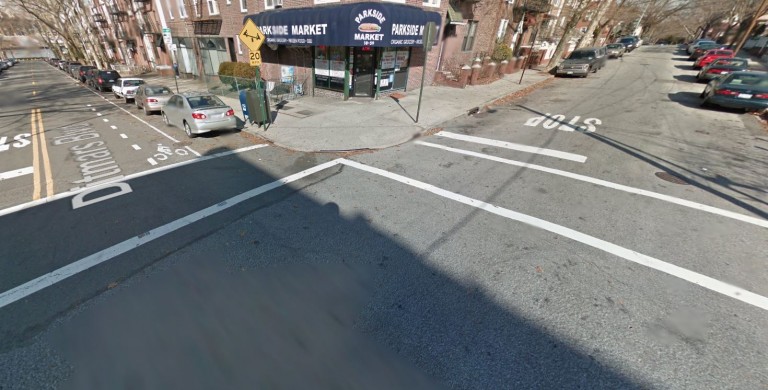 PHOTO:  In June, Nicholas Colleran blew through a stop sign at the intersection of Ditmars Boulevard and 19th Street in Astoria and mowed down Betty DiBiasio, 21, who eventually died from her injuries. Colleran, 25, was sentenced last week to one-and -a-third to four years in prison after pleading guilty to criminally negligent homicide. Photo Courtesy of Google

An Astoria man, who pleaded guilty last month to criminally negligent homicide and failure to yield the right of way, has been sentenced to up to four years in prison for going through a stop sign this past June and fatally striking a female pedestrian in a marked crosswalk, according to Queens District Attorney Richard Brown.

Nicholas Colleran, 25, pleaded guilty on Oct. 22 to criminally negligent homicide and violating administrative code 19-190 (Failure to Yield Right Of Way) before Acting Supreme Court Justice Dorothy Chin-Brandt, who sentenced Colleran last Thursday to the maximum penalty under the law – an indeterminate term of one and one-third years to four years in prison.

According to the criminal charges, Betty DiBiasio, 21, was crossing in a marked crosswalk at the intersection of Ditmars Boulevard and 19th Street at approximately 12:30 a.m. on Saturday, June 27, when Colleran drove his 2002 Chevrolet Impala through a stop sign without stopping and struck DiBiasio. Witnesses at the scene said that the victim hit the driver’s side windshield and fell to the ground, and that the Impala took off without stopping.

DiBiasio was rushed to an area hospital where she was pronounced dead as a result of the injuries she sustained in the collision.

Colleran’s Impala was discovered later that Saturday morning on 42nd Street in Astoria. The vehicle had a broken windshield, a broken driver’s side-view mirror and a damaged driver’s side front fender. There also appeared to be blood and hair in the driver’s side windshield, where it was broken, and was consistent with a vehicle striking a pedestrian and the pedestrian hitting the windshield.

Colleran surrendered to authorities at the 114th Precinct stationhouse on Sunday, June 28. He admitted to driving the Impala on Ditmars Boulevard just after midnight on June 27. Colleran told cops that he had consumed two beers prior to driving, and that he had hit DiBiasio.

He also said that there was damage to his windshield, that he panicked after hitting DiBiasio, and fled the scene. Colleran was unable to produce a valid driver’s license for authorities.

“This case is yet another example of how deadly motor vehicles can be and the consequences of ignoring traffic regulations,” Brown said. “Driving is a privilege, not a right, and extreme caution should be exercised at all times in order to prevent lives from being senselessly destroyed.”