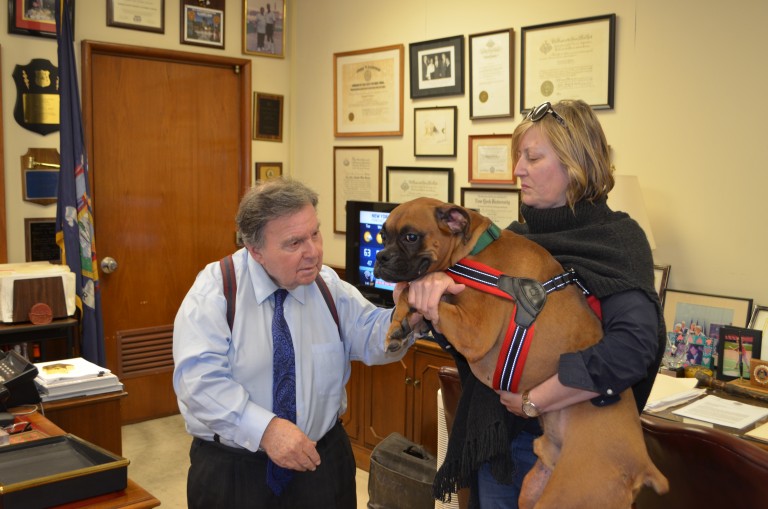 A Ridgewood man has pleaded guilty to felony animal cruelty in a case in which he brought a starving boxer that he claimed to have found lying in a park to a city shelter in October. It was later determined that he was actually its owner and had failed to properly care for or feed the dog now named Brewster, according to Queens District Attorney Richard Brown.

Anthony Estevez, 25, pleaded guilty on Tuesday to aggravated cruelty to animals, and was sentenced to a conditional discharge; the conditions including that he is banned from owning an animal for three years and that he is required to register with the city Department of Health and Mental Hygiene as an animal abuser.

According to the charges, Estevez brought a Boxer breed dog to an Animal Care and Control shelter on Queens Boulevard on the afternoon of Oct. 13. Estevez said that he had found the dog lying in a park, and when asked by shelter employees for his home address he provided a false one. According to ACC records, the condition of the dog was recorded in the case file as “… not enough energy to walk… after dog left there were blood stains in the kennel.”

Estevez said at first that if the dog healed he wanted to adopt it; however he later retracted his alleged interest in adopting the dog.

The dog weighed only 25 pounds and its condition was very acute in terms of being emaciated and skeletal when it was brought to the shelter, Brown said. Based on its bone structure and height, the dog should have had a weight range of about 60 to 65 pounds.

When the city Police Department received an inquiry from the New York Daily News about the boxer, an investigation was commenced which revealed that Estevez had provided ACC authorities with a false address—one next door to where he actually lived. When interviewed by authorities at his residence on Oct. 19, Estevez provided various stories about to whom the dog belonged and how he had obtained the dog, before finally admitting that the dog was his and that he did not want the Boxer to die in his bedroom.

Based on the “Purina Scale,” which runs from Level 1 (very emaciated) to Level 9 (very obese), with Level 5 defined as being healthy and hale, the boxer was rated Level 1 by an American Society for the prevention of Cruelty to Animals forensic veterinarian one week after being surrendered by Estevez. The veterinarian allegedly stated that it would take weeks, if not months, for a dog of such size to be assessed at Level 1 if the dog had started out as healthy.

Brown reported that Brewster has since recovered, and is expected to soon be adopted “into a loving home.” Meanwhile, Estevez now “is a convicted felon who is prohibited from owning another animal and must register with the New York City Department of Health as an animal abuser.”