Law enforcement officials over the past seven days have intensified their search for a prolific Forest Hills firebug who they say is solely responsible for at least seven arsons—all on construction sites—since October.

He last hit the community early Sunday morning, lighting up a location on 69 Road.

Frustrated fire investigators reached out to the public last week to help them smoke out the arsonist who has left a normally quiet neighborhood on edge. Authorities initially only pinned four of the fires on him.

However, on Monday cops added three more to his ledger of destruction.

In each case, the suspect entered the site and ignited flammable combustibles before fleeing on foot, according to the city Police Department. 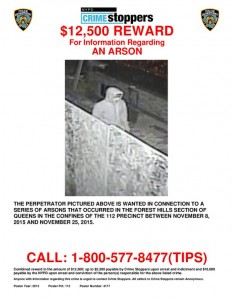 The FDNY, 112th Precinct Detective Squad, and NYPD Arson and Explosion Squad have determined that the seven blazes began on Tuesday, Oct. 20, and have resulted in property damage and one minor injury to a firefighter. Three of the fires actually spread to adjoining properties, causing additional damage and the displacement of 13 people.

“The string of arson that has occurred in Forest Hills over the last several weeks is putting our entire community at risk and must be stopped immediately,” said state Sen. Joe Addabbo, Jr. (D-Howard Beach). “These fires that are deliberately being set are not just affecting vacant houses or construction sites, they are also causing serious damage to neighboring properties and putting the lives of innocent people at risk. While I am thankful that so far no one has been hurt by these senseless acts, I am hopeful that the person responsible for this will be found before a bigger tragedy occurs. I thank the FDNY and NYPD for working together on this and urge anyone with any information to come forward as soon as possible.”

Based on video evidence, cops said, the perpetrator is believed to be a white or light Hispanic man, 5-foot-6 to 5-foot-7, slim build, and dressed in a hooded sweatshirt.

The reward has been jacked up to $12,500. All calls are strictly confidential.