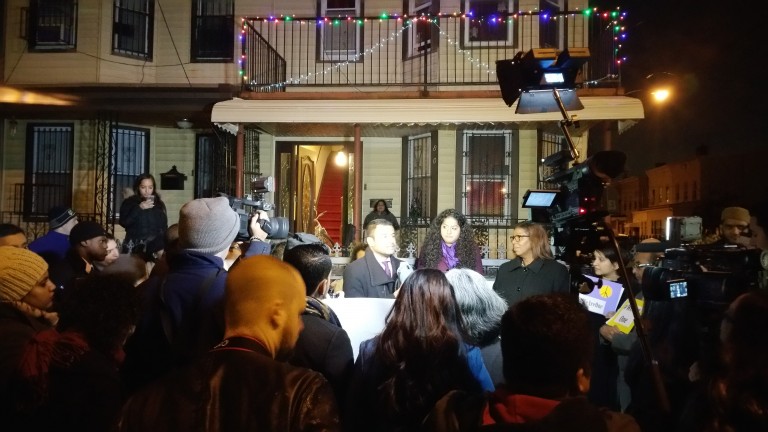 In a passionate show of solidarity, community and cultural leaders and elected officials last Friday night rallied in front of a Woodhaven home that became a crime scene on Thanksgiving after a still-at-large suspect set fire to dozens of Hindu prayer flags displayed in the front yard of the 89th Avenue residence.

The arson incident, which occurred last Thursday around 1:15 a.m., is being investigated as a hate crime.

“An unknown suspect entered the victims’ front yard and did ignite a fire to 40 religious Hindu flags before fleeing southbound on 80th Street,” according to investigators, who added that no one was injured in the attack.

The perpetrator was seen wearing a three-quarter length jacket and baseball cap, and pulling a medium-size travel bag.

“There are some real sick people out there,” Ramesh Kilawan recalled thinking when he first viewed the security footage of the attack.

According to the Indo-Caribbean Alliance, Inc., the jhandi flag is a highly visible, quintessential marker of Indo-Caribbean culture that transcends religion, ethnicity, and race. Made of bamboo and colorful pieces of cloth that symbolize Hindu deities, jhandi flags are placed next to a home’s private temple or in its yard after a Hindu religious ceremony, or pooja.

“When one person or family is targeted in our community and they are made to feel unsafe, no one in our community is safe,” said ICA Executive Director Kenrick Ross. “As we promote multicultural dialogue and foster tolerance and understanding, let us also be clear that the onus is not on minorities, immigrants, and communities of color to justify why they should be treated with basic fairness, dignity, and respect. It is rather on all of us, particularly public figures, to ensure that we create environments which are inclusive, tolerant, and supportive.”

After an aggressive social-media push, more than 50 people turned out for the #WeAreOne assembly.

“I am truly outraged,” said City Councilman Eric Ulrich (R-Ozone Park). “We should not tolerate any violence against Hindus. They are voting, paying taxes…making New York City a better place to live.”

Ulrich later added that the lively Friday night gathering would not go unnoticed.

“We talk about light overcoming darkness,” he said. “We are shining a bright light.”

“People want to know what America looks like,” he said. “Look around you—you have your answer. You have a regular United Nations here. We’re saying we stand for an America for everybody.”

Several elected officials and civic leaders pledged funds toward a reward for the case. By the time the crowd dispersed, the bounty had reached nearly $4,000.

“We have to respect each other,” Kilawan, a father of three who emigrated from Guyana 30 years ago, told The Forum as he proudly held a sign with the “WeAreOne” hashtag. “I believe in unity in diversity – this way we can all make this city great.”