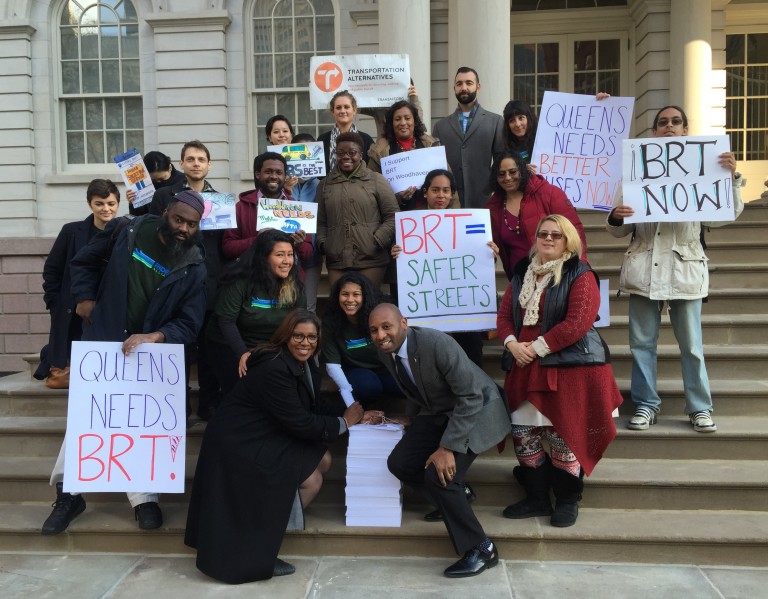 Just as a pro-Select Bus Service coalition comprised of elected officials and transportation advocacy organizations was trumpeting “increased community support” for the Woodhaven-Cross Bay Corridor SBS Project at a press conference on Monday in Manhattan, a Woodhaven civic group was blasting the alliance and reiterating its opposition to the rapid transit plan.

City Public Advocate Letitia James, City Councilmen Donovan Richards (D-Laurelton) and Jimmy Van Bramer (D-Sunnyside), and the BRT for NYC Coalition took to the steps of City Hall to provide evidence of what they characterized as increased community support for bringing Bus Rapid Transit to the borough.

Riders Alliance – a grassroots commuter group and member of BRT for NYC – announced the collection of 7,000 bus rider signatures along the Woodhaven-Cross Bay Corridor, demonstrating support for bringing BRT to these neighborhoods.

Additionally, the Coalition announced a small-business letter of support, including dozens of signatures from small business owners in Queens who want to see BRT implemented along Woodhaven and Cross Bay boulevards. Entrepreneurs who have signed onto the letter represent restaurants, retail, and professional services, according to the Coalition.

“Bus Rapid Transit will make Woodhaven and Cross Bay boulevards a safer corridor for everyone,” said Paul Steely White, executive director of Transportation Alternatives. “The city’s redesign plan will make it easier for people walking, biking, taking the bus or driving to get where they need to go safely along this critical north-south route. Too many people have been killed and seriously injured in crashes on Woodhaven and Cross Bay boulevards. The time for action is now, and implementing BRT is an essential part of protecting the people who live, work, and travel in Eastern Queens.”

The Woodhaven Residents’ Block Association on Monday afternoon released a statement responding to the “pro-SBS rally.”

“This rally shows everything that’s wrong with the way SBS is being shoved down our community’s throat,” the civic said. “The rally was supposed to indicate support for SBS in our community, yet it was held far away from our community, and was sponsored by a slew of outside organizations pushing an agenda that ignores our community’s concerns. What’s more, a massive, influential public affairs agency was apparently hard at work drumming up support for this rally. That’s all extremely fitting, because the push for SBS is not about improving our community.  It’s about city officials teaming up with powerful, well-funded interests to drown out the voices of regular residents who don’t have expensive lobbyists and consultants representing them.

“The Woodhaven Residents’ Block Association represents the people in this community. We might not be part of the conversations that the de Blasio administration is having behind closed doors to try to burnish the mayor’s legacy. But long after these officials are out of office, and long after the people at the rally have collected their paychecks and moved on, the people of Woodhaven and nearby neighborhoods will have to live with the consequences of SBS. We’re the ones who really know what it will do to our community.

“No artificial ‘rally’ can change the reality that this community – the people most affected – strongly opposes the SBS plan.  And we will continue to fight to ensure that our voices – the voices of ordinary New Yorkers – aren’t drowned out by those who think they can do what they want to our community just because they’re powerful.”