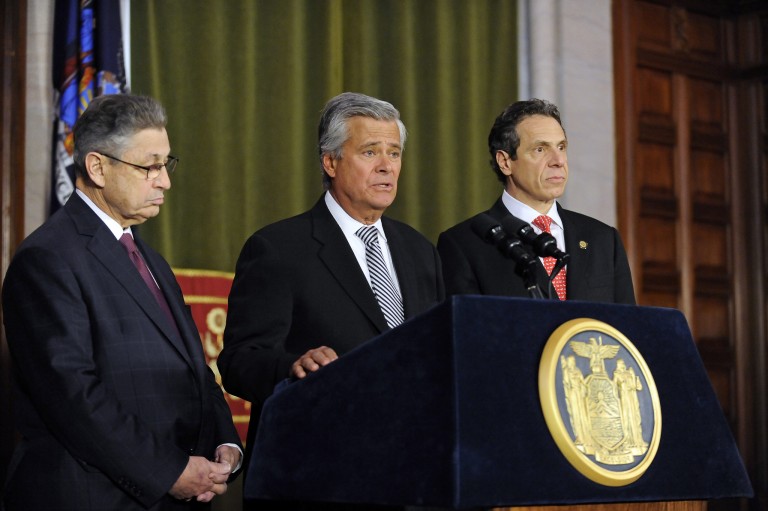 Just 10 days after former Assembly Speaker Sheldon Silver was convicted in federal court on all counts of fraud and extortion, former state Senate Majority Leader Dean Skelos and his son, Adam, were found guilty last Friday on all counts of federal corruption.

Dean, 67, and Adam Skelos, 33, were convicted of extortion under color of official right, soliciting bribes in connection with a federal program, and conspiracy to commit honest services fraud. Southern District prosecutors charged that the duo extorted those with business before the state to make payments to Adam with the expectation that such payments would result in official action by his father.

Father and son were also charged with bribery and honest services fraud schemes. Among other things, Dean illegally obtained a $20,000 payment for his son from a large real estate developer dependent on the GOP senator for tax breaks and a $10,000 monthly payment from an environmental technology company seeking government-funded contracts in New York.

“The swift convictions of Sheldon Silver and Dean Skelos beg an important question – how many prosecutions will it take before Albany gives the people of New York the honest government they deserve?” he asked in a statement released last Friday.

When the Skeloses surrendered to the Federal Bureau of Investigation in May, Bharara said that even though his office has been aggressively prosecuting lawmakers, corruption remains a pervasive problem in the Empire State.

“As the complaint charges, in six counts, Dean Skelos unlawfully used his power and influence as Senate Majority Leader, repeatedly, to illegally enrich his son, Adam, and indirectly, himself. And, more specifically, the Complaint, in multiple places, alleges that Dean Skelos’s support for certain infrastructure projects and legislation was often based, not on what was good for his constituents or good for New York, but rather on what was good for his son’s bank account,” Bharara said. “By now, two things should be abundantly clear. First, public corruption is a deep-seated problem in New York State. It is a problem in both chambers; it is a problem on both sides of the aisle. And second, we are deadly serious about tackling that problem.”

According to the complaint and testimony, Dean obtained over $200,000 in payments to Adam through pressure applied to a senior executive of a major real estate developer who cooperated with the government. In response to this pressure, the developer paid $20,000 to Adam and further arranged for an environmental technology company to make $10,000 monthly payments to the junior Skelos. The developer depended on Dean for favorable real estate tax abatements and legislation. In return for the payments to Adam, and to ensure that they would continue, Dean took official actions to benefit both the developer and the Environmental Technology Company, including promoting state legislation beneficial to the companies.