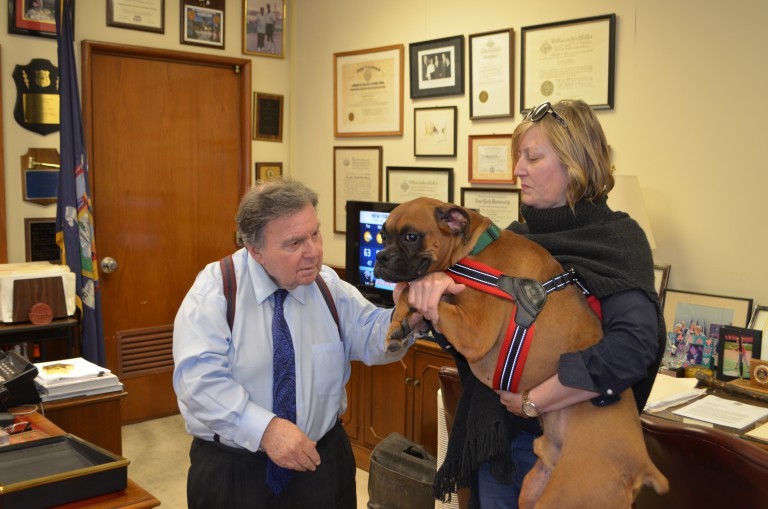 PHOTO: DA Brown said his newly formed ACPU is the first of its kind in a district attorney’s office in New York City. File Photo

Queens District Attorney Richard Brown announced this week that he has created an Animal Cruelty Prosecutions Unit, which will work closely with the newly formed NYPD Animal Cruelty Investigations Squad, in pursuing allegations of animal cruelty, abuse and neglect in Queens.

The mandate of the Animal Cruelty Prosecutions Unit – the first of its kind in a district attorney’s office in New York City – will be to investigate and prosecute animal cruelty crimes and to educate the public about how to prevent and detect abuse of animals.

In creating the ACPU, Brown also announced that he has appointed veteran prosecutor Nicoletta Caferri as its inaugural chief. Brown described Caferri as a career prosecutor who has been with the Queens DA’s Office since 1992. Most notably, she handled the appeal of People v. Curtis Basile, in which the state Court of Appeals recently affirmed the 2007 animal mistreatment conviction of Basile who showed a complete disregard for the life of a helpless animal by failing to furnish the basic necessities required to maintain the dog’s health. Since then she has been invited to speak at various prosecutorial forums across the country and has been asked to do law enforcement training nationally and to work on amicus curiae briefs for other prosecutors.

Other animal cruelty cases that Caferri has assisted in prosecuting, Brown noted, include that of a Ridgewood resident who pleaded guilty to a felony charge of aggravated cruelty to animals last month for failing to properly care for or feed his dog that was emaciated, severely malnourished and did not have the energy to walk when brought to an animal shelter.  The defendant was sentenced to a conditional discharge, with the conditions including that he be banned from owning an animal for three years and that he be required to register with the New York City Department of Health as an animal abuser.

As in the previous case, Caferri is working with Assistant District Attorney Oscar W. Ruiz, the deputy chief of the District Attorney’s Special Proceedings Bureau, in prosecuting a Jamaica man on aggravated animal cruelty and other charges after he was allegedly observed kicking, punching and choking his pit bull-mix puppy over a six-week period.

“Niki is the ideal candidate to head up the newly created initiative,” Brown said. “She is an accomplished appellate attorney who is extremely passionate about her work and has an extraordinary and unparalleled commitment to upholding the state’s animal cruelty laws and in protecting the interests of victimized animals.”

The new QDA unit hit the ground running this week. A Jackson Heights man has been charged with aggravated animal cruelty and other offenses after allegedly slamming his girlfriend’s 3-year-old Chihuahua against the floor, killing the animal, during a verbal dispute Sunday afternoon.