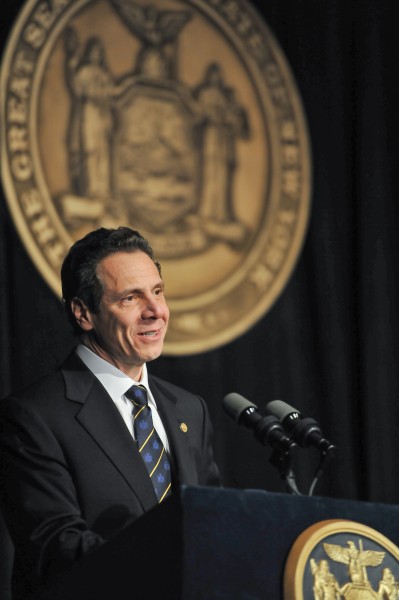 PHOTO: Gov. Cuomo said his plan for the MTA is about “thinking bigger and better and building the 21st century transit system New Yorkers deserve.” Photo Courtesy of the Governor’s Office

For those of us who’ve at once celebrated – and lamented, due to poor signals – free wireless zones at certain Metropolitan Transportation Authority train stops, Gov. Andrew Cuomo’s recent announcement that, over the next few years, the entire MTA will be technologically overhauled for the 21st century comes as music to our ears.

“The MTA is absolutely vital to the daily functioning of New York City, but for too long it has failed to meet the region’s growing size and strength,” Cuomo said. “This is about doing more than just repair and maintain – this is thinking bigger and better and building the 21st century transit system New Yorkers deserve. We are modernizing the MTA like never before and improving it for years to come.”

The proposal, the eighth signature item of Cuomo’s $26 billion 2016 capital agenda, aims to revamp the entire transit system and includes numerous upgrades to “embrace the digital future” and take a “transformative approach” to station redevelopments – with a distinct emphasis on expediting the plan by streamlining the procurement process.  Among the proposed improvements: while more than 140 underground stations currently have cell phone, data, and Wi-Fi service, the plan is to implement Wi-Fi in all underground 277 stations by the end of 2016, with cell phone service available in all of them by early 2017.

In addition, mobile payment and ticketing will become available, allowing transit riders to use a single app and transit account to pay for fares.  Subways and buses will start using contactless payment methods in 2018.  Real-time data delivery will be accelerated for all 469 subway stations, doubling the number of On the Go Travel stations, the interactive touchscreen kiosks that provide real-time route planning information and maps. More “Help Points” will also be installed.  Help Points provide service information and offer emergency assistance via direct communication lines.

And bussing might actually become fun:  riders are set to have a better experience aboard subway cars and buses, with digital information screens, Wi-Fi hotspots, and USB charging ports for mobile devices. Charging ports will be installed on 200 subway cars this year and 400 next year, while all new buses delivered starting later this year will have Wi-Fi hotspots. By 2018, some 1,500 buses will have Wi-Fi hotspots and USB charging ports, bringing a new level of connectivity and convenience to customers. A pilot program to install digital information screens on 200 buses will also launch this year, displaying information about upcoming stops and service alerts.

Technological advancements will also enhance MTA’s security. Stations will get overhauled lighting.  More surveillance cameras will be installed in the entire MTA fleet, with existing buses retrofitted with cameras in addition to new buses delivered.  While 85 percent of the bus fleet will have cameras by the end of the capital plan, the MTA will only begin testing surveillance cameras on subway cars for the first time later this year. According to NYPD statistics, subway crime rose by nearly 11 percent in 2015.  Transit crimes make up for about 2% of overall city crime.