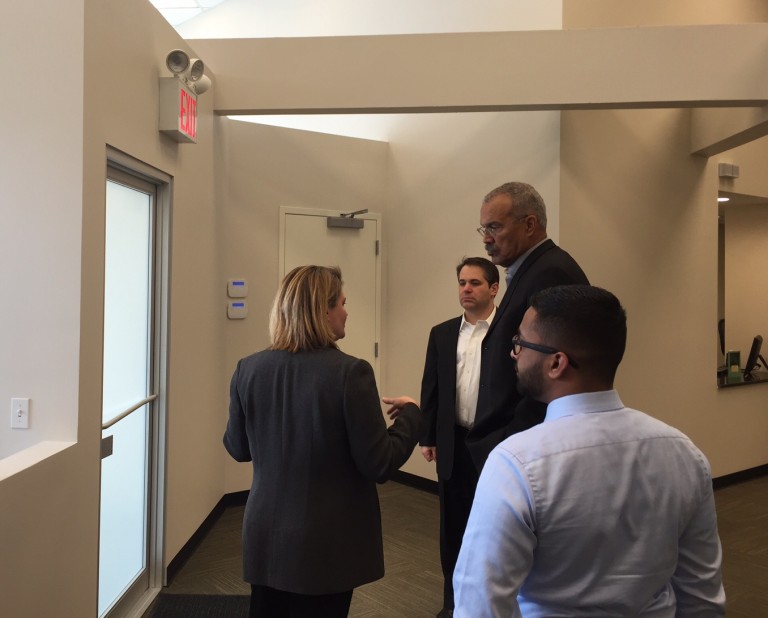 The borough’s first medical marijuana dispensary opened its doors last Friday in Elmhurst to little fanfare but with high hopes of improving the quality of life for those suffering from serious chronic conditions such as HIV/AIDS, cancer, multiple sclerosis, and Parkinson’s disease.

Medical marijuana officially became legal in New York on Jan. 7 of this year.

The Elmhurst dispensary, operated by Vireo Health of New York, is located at 89-55 Queens Blvd. and is the second such establishment to open in the city. Vireo is one of five companies to be awarded a license to manufacture and provide pharmaceutical-grade cannabis-based medications in the state. Bloomfield Industries runs the city’s only medical marijuana production facility in Long Island City.

Asked about opening day, Dr. Stephen Dahmer, Vireo’s chief medical officer, said that while it went well, he “wished there were more patients.”

But, he believes that will change with time and further investigational studies of the applications of medical marijuana.

“There is a growing body of evidence that says that cannabis can relieve certain conditions and help alleviate symptoms,” Dahmer said.

Ari Hoffnung, CEO of Vireo Health, told Time Warner Cable News NY1 that “Over 200 physicians have taken four hours of their time to learn about medical cannabis and to become certified by the state so that they can recommend medical cannabis to their patients.”

Under the program, doctors must be certified to prescribe the medications, and patients must have a recognized, severe condition to be eligible.

According to the State Department of Health, as of this week, 292 physicians have registered for the NYS Medical Marijuana Program and 409 patients have been certified by their doctors as having eligible conditions.

While Dahmer acknowledged the fear of people obtaining prescriptions illegitimately, he said they should be allayed by the tight regulations and monitoring that characterize New York’s program.

“Some patients want to try cannabis for their conditions,” Dahmer added, “but are nervous about buying on the street for fear of what it may contain, how it was grown, or otherwise processed, etcetera.”

State Sen. Joe Addabbo, Jr. (D-Howard Beach) said that he voted in favor of medical marijuana In 2014, after “much consideration,” because he believes in the benefits it can bring to people truly suffering from a specific chronic medical condition that few other prescriptions can help ease.

He also added that the Elmhurst dispensary would give more local, convenient access to seriously ill patients.

However, Addabbo also said that the site would need to be closely watched to prevent possible abuses.

“It is critical that this facility is well regulated and held to the highest level of accountability in order to ensure that the Medical Marijuana Program is a success rather than a disaster,” he said. “There are many risks involved in running a facility and a program of this nature, and the only way it can work properly and legally is to make sure that it is monitored and done responsibly.”

“Anytime you deal with controlled substances, there is potential for abuses,” he said.

Assemblyman Phil Goldfeder (D-Howard Beach), who also voted in favor of medical marijuana, said, “We will be watching the location, to make sure they’re following every rule.