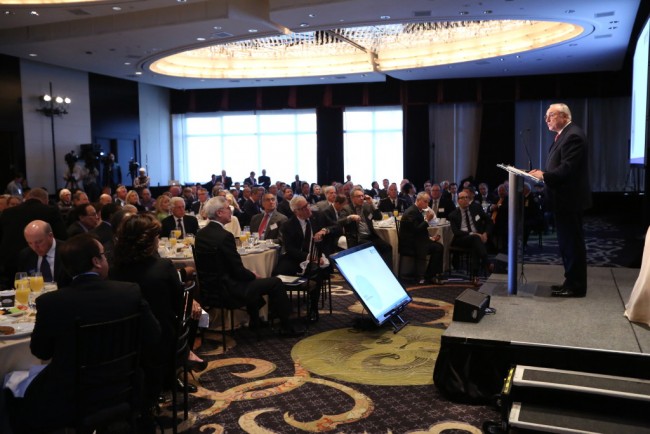 That is how Police Commissioner Bill Bratton described the NYPD last week as he delivered a state of the department address and released the Police Commissioner’s Report in the ballroom of the Mandarin Oriental hotel in Columbus Circle.

Bratton discussed technology roll outs, training modifications, enhanced counterterrorism capabilities, and community partnership, among myriad other topics. He trumpeted the expansion of the Neighborhood Policing patrol model to 20 precincts and housing commands, with a promise of more to come in the months ahead.

The patrol plan frees up personnel and other resources to focus on underlying issues in a neighborhood that fuel much of an area’s crime and disorder.

“When cops are running from call to call, when they’re asked to address things that go far beyond crime prevention, they simply do not have the time to engage people in any meaningful way,” Bratton noted. “For some neighborhood residents, especially in minority neighborhoods, policing seemed like something done to them rather than with them. In those places, all this enforcement without connection had established a sense of being over policed and under protected, and a worrying community dissatisfaction. The cops were dissatisfied too, and this was a centrally important point. Most cops are problem solvers by nature. They want to fix things. But the way police patrol has been organized in the past hasn’t allowed them to do it. Radio response often means moving from one little crisis to another without any opportunity to make headway against the problems a cop encounters.”

Bratton said that Neighborhood Policing connects the cops with the public “in a way we haven’t approached for decades.”

“It operationalizes community policing in a way that eluded previous models and reestablishes the primacy of patrol as the backbone of preventive policing,” he continued. “The model puts officers in steady geographic areas called sectors, and makes them familiar with and responsible for that sector’s people, problems, and potential. It anchors these sectors with Neighborhood Coordinating Officers, or NCOs—volunteer officers, modeled on the Senior Lead Officers used by the LAPD—who take real ownership of their sectors.”

However, in order to make the model a reality, Bratton noted, the city would need more cops—and that’s just what the department received—the first “true headcount expansion” in more than a decade.

“By July of this year we’ll have effectively increased our ranks by 2,000 cops,” he said.

“Communicating to break down separation is the name of the game—telling the cops that we care about them, and letting everyone know just how much the cops care for the community,” he said. “It’s diplomatic soft power—the idea that two-way communication, and two-way sharing of culture and values is the key to changing public opinion. It’s at the heart of what I talk about when I talk about our need to see each other, to hear each other, and to recognize that we’re all connected.”