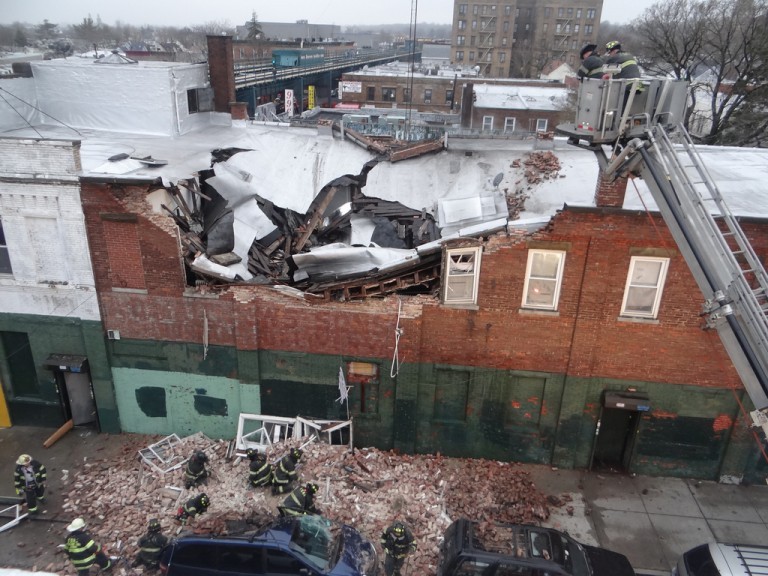 PHOTO: The Woodhaven-Richmond Hill Volunteer Ambulance Corps was forced to shut down in 2013 because of safety concerns and structural damage after the building next door to Corps headquarters on Jamaica Avenue partially collapsed. File Photo

The Woodhaven Residents’ Block Association last Saturday expressed frustration at what the group characterized as the continued lack of communication from the Woodhaven-Richmond Hill Volunteer Ambulance Corps regarding the Jamaica Avenue building the WRHVAC called home until three years ago, when the partial collapse of the neighboring building forced the Corps to close its doors.

City Department of Buildings Queens Community Liaison Kenneth Lazar updated the community on the condition of the affected edifice last Saturday at the civic’s monthly Town Hall. Lazar said additional citations for various violations have been issued recently to the owners of the building that once housed a furniture shop; and that the DOB is keeping tabs on the situation.

However, Lazar also noted that the agency can’t do much more than monitor until the building is deemed to be an “imminent danger to the public.” He acknowledged that while it lacks a proper roof at the moment, the building is not an impending threat.

Lazar also said the DOB can’t really provide assistance to the WRHVAC—it needs to take the proper action for their building. WRBA President Martin Colberg expressed frustration with the Corps because he feels that it seems intent on selling the building without answering any questions from the public and sans any accountability to the community.

Since the Corps announced in March 2014 that it had to suspend operations, community groups have organized several fundraisers—to no avail.

Colberg said he was concerned about the possibility of a secretive sale resulting in emergency medical resources being sent out of Woodhaven.

Catholic Charities Woodhaven-Richmond Hill Senior Center, which rented building space from the first responders, subsequently relocated after the fire and partial collapse, effectively cutting off a critical source of revenue for the WRHVAC.

The DOB had tried to demolish the building, but a Queens Supreme Court judge granted the owners a litany of construction extensions—placing the edifice, WRHVAC, and the communities that have depended on its care for half a century in limbo.

“This story has been one of failure on many levels,” WRBA Director Ed Wendell fumed a year ago.

“The city and that judge dropped the ball, and we pay the price,” State Sen. Joe Addabbo, Jr. (D-Howard Beach) said on Saturday.