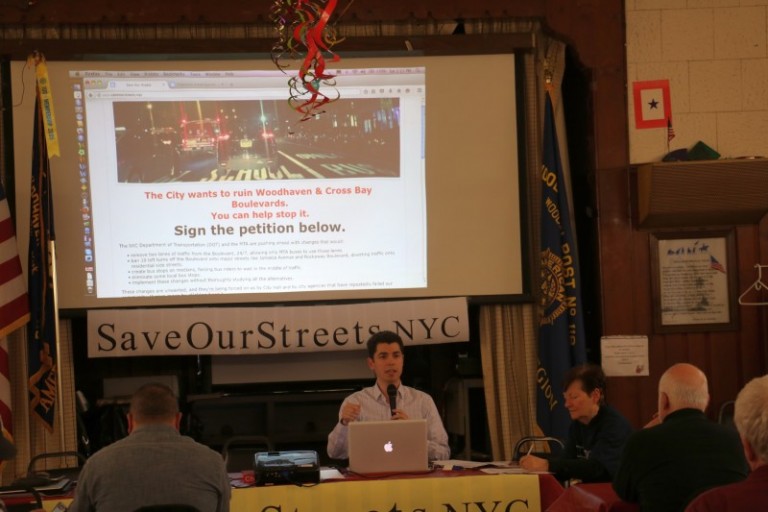 A nascent coalition aligned with a long-standing Woodhaven civic organization last week unveiled a new website that, in part, will host a petition aimed at gathering support for opposition to the proposed Woodhaven-Cross Bay Corridor Select Bus Service Project.

The Boulevard Improvement Group, a coalition that grew out of the Woodhaven Residents’ Block Association, introduced SaveOurStreets.NYC last Saturday at the civic’s monthly Town Hall.

“The City wants to ruin Woodhaven & Cross Bay Boulevards. You can help stop it. Sign the petition below,” BIG greets the visitor in bold block lettering on the SOS homepage.

It then lists the potential changes to the boulevards that the current Department of Transportation and Metropolitan Transportation Authority SBS plan would create, including the removal of two lanes of traffic from the Boulevard, 24/7, allowing only MTA buses to use those lanes; banning 19 left turns off the Boulevard onto major streets like Jamaica Avenue and Rockaway Boulevard, diverting traffic onto residential side streets; create bus stops on medians, forcing bus riders to wait in the middle of traffic; eliminating some local bus stops; and implementing these changes without thoroughly studying all the alternatives.

“These changes are unwanted, and they’re being forced on us by City Hall and by city agencies that have repeatedly failed our community,” BIG wrote on the homepage. “The only way to stop it is by telling DOT and MTA that we will not tolerate their Select Bus Service plan that would ruin Woodhaven & Cross Bay Boulevards. Send that message by signing this petition…”

The civic has indicated that in the months ahead it plans on making the petition a major priority to raise awareness of the SBS plan’s problems, and to gather signatures of support along the entire 14-mile corridor that stretches from Beach 96th Street in Rockaway to 61st Street in Woodside.

While most in attendance last Saturday seemed to be inspired and reinvigorated by the new site, some cynics called SBS a done deal, and that there’s nothing Joe Citizen can do to pump the brakes on the project. Civic leadership said that that’s just a way to get groups like the WRBA to cease opposition efforts; and that affected communities need to keep up the fight. They cited the online petition drive as a crucial way to do that.

If you do not have access to a computer, you can call BIG (at the WRBA office) at (718) 296-3735. If you get the voicemail, you should say you want to be a signatory of the petition against the SBS plan for the Boulevard. Clearly state your name, the spelling of your name, address, and phone number.

Or you can send a letter to BIG, indicating you want to be a signatory of the petition against the SBS plan for the Boulevard, and prove your full name, address, and phone number.

The letter can be mailed to: