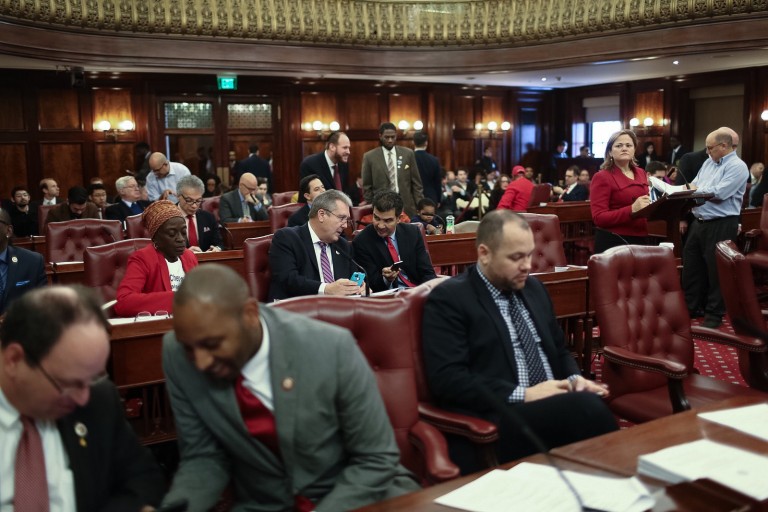 Members of the City Council last Friday voted overwhelmingly in favor of giving themselves a sizable raise and to make structural reforms to the legislative body.

Last month, the Quadrennial Advisory Commission recommended a 23-percent punch-up in pay to $138,315. And the panel had called for the Council Speaker’s salary to jump to $154,375.

This is the Council’s first pay raise in 10 years.

In addition to the raises, the Council authorized a package of reforms to make it “more open, accountable, and transparent,” including legislative items that eliminate stipends—or “lulus”—for committee chairs and other leadership positions; change the position of City Council Member from part-time to full-time, and direct the Council to set rules prohibiting most outside earned income; require that financial disclosure (Conflict of Interest Board) forms of all city elected officials be placed online for the public to view; extend the deliberation time of the Quadrennial Advisory Commission from two months to 120 days, and changes the timing of the appointment of future Commissions, from the second year of the term to the third year, to make it more likely that future Commissions will recommend that raises do not go into effect until the next term.

“These unprecedented reforms will strengthen the Council as a legislative body and help Council Members better serve their constituents,” said Council Speaker Melissa Mark-Viverito. “By restricting outside income, designating Council Members’ positions as full-time jobs, and eliminating stipends for members, we’ll fulfill many recommendations of good-government groups and set a new standard for elected officials in our city.”

“I’m proud to see the City Council implementing several long-sought and important reforms today,” added Councilman Brad Lander (D-Brooklyn). “By eliminating ‘lulus’ for leadership positions, we diminish favoritism and promote independence. By making City Council positions full-time and eliminating outside employment, we remove temptations to corruption and ensure that future representatives are dedicated full-time to serving constituents, and by putting our financial disclosures online, we advance transparency and avoid conflicts. By changing the timing of future quadrennial commissions we make it more likely that future raises take effect only in the following term. These changes further advance the already significant reforms the Council has made under Speaker Mark-Viverito’s leadership and I’m glad to vote for their passage today.”

Mayor de Blasio has indicated that he fully supports the Council’s official move to full-time positions.

“The loss of potential income from transitioning to a full-time status is not insignificant. However, should the City Council adopt this groundbreaking reform in New York City, it will have the dual benefit of allowing Council Members to fully commit their time and energy to their constituents and eliminating even the appearance of conflicts of interest,” de Blasio noted last month.