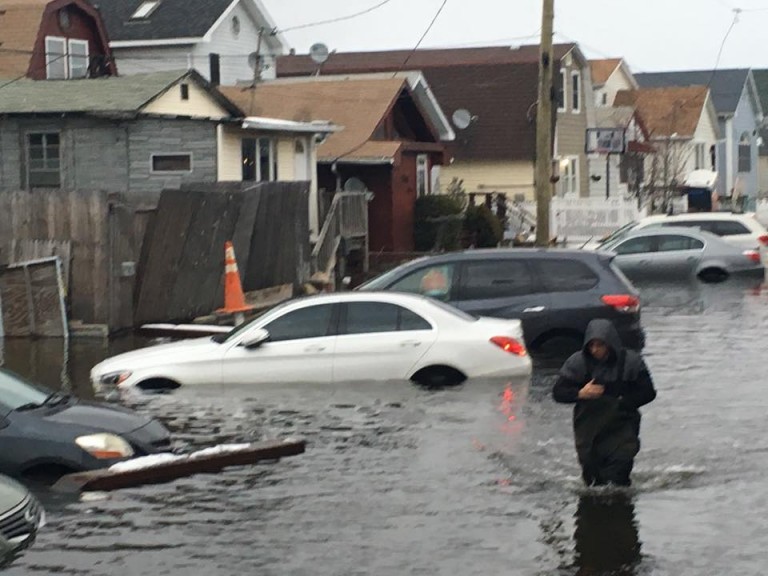 In almost any other coastal town, high tides come with their own set of headaches, but those headaches are practically rote, and habitually, people deal with them and then move on. We know it’s coming and so we park our cars a block or two away from the street that butts against the bay, or we check to make sure the pumps are working. Sometimes we actually must roll up our pants legs and do a little wading. It’s not a big deal for the old locals that have been here for a while. Like the sound of planes overhead, extra water around these parts from time to time pretty much comes with the territory. And tides are mostly predictable, based on positions of the moon and sun in relation to the earth. Tides vary, of course, but tidal gauges usually serve as accurate monitors (and thus, predictors) to help prepare us for whatever the future brings.

It’s when other factors come into play that things get dicey. This week, Old Howard and Hamilton Beach experienced a double whammy. The regular morning and evening high tides (as this area and most of the eastern coast of North America experience a semi-diurnal cycle) were exacerbated by winds off the coast. Normal lunar tides and storm surges combined make dangerous cocktails known as storm tides, and we got two of them. Pictures of flooded residential streets and nearly submerged cars were (literally) flooding social media all day Monday.

“We can’t ever control the tides or the weather…regardless of how much we do, we are always going to be surrounded by water and be vulnerable to mornings like today,” said Assemblyman Phil Goldfeder to a constituent on Facebook, with the sort of pragmatism that we don’t always get to see in politics or in life. In fact, there’s an actual phenomenon that occurs to people who experience climate change effects in the form of rising seas and dangerous storms: phys.org says that people tend to think that they’ll be far-removed from disasters – that bad things could happen to other people in distant towns, not right here in our own backyards. Sympathetic and concerned though we may be, we don’t consider ourselves to be at risk. It’s called “optimism bias.”

In almost any other coastal community.

Because here in Howard Beach and environs, flooding and the fear of water’s wrath runs deeper than ankle-high. And we have Superstorm Sandy to thank for that. For now, the mere sound of dripping reverberates in our ears like an annoying type of surreal beacon: Make sure nothing (and no one) you love is getting wet. Move to higher ground. Batten down the hatches. We switch into gear, we take care of business. But for some of us, that methodical response also comes with a knee-jerk emotional reaction, something akin to post-traumatic stress disorder. We wake at three am with a start, thinking it’s time to wetvac the basement, even if that particular task could probably wait until (later) morning. And we get sad, thinking of all that we lost for good – wedding dresses, photographs, and most importantly, a sense of stability in our own homes – three years ago in the storm. The floods will abate, like the ebb of the tides, and the water will retract from the ever-evolving shorelines. But constant will be our high-alert status, and along with it our resilience to at least attempt to fight any surges that lie ahead.