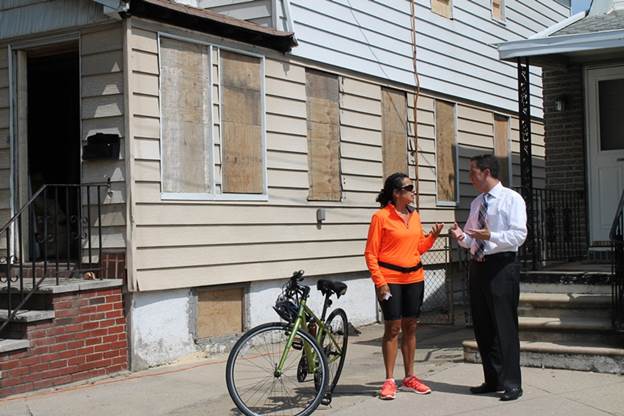 This fall, southern Queens and the Rockaway Peninsula will mark four years since Superstorm Sandy eviscerated communities, leaving residents and business owners of tight-knit neighborhoods like Hamilton Beach or Breezy Point to pick up the tattered, shattered pieces, rebuild and move on—physically, at least.

However, Assemblyman Phil Goldfeder (D-Howard Beach) this week blasted the City Department of Buildings for a backlog of pre-Sandy violations holding up applications in the Build it Back program.

Goldfeder faulted the agency for not prioritizing Sandy recovery and called on Chandler to intervene. The assemblyman added that members of his staff have spent “hours and days” working with borough DOB officials to resolve permitting issues and provide assistance to families still waiting to rebuild.

“Many families are still struggling to obtain building permits or clear outstanding pre-Sandy violations. More than three years after Sandy, it is unacceptable that DOB is still not dedicating the resources to get people home,” Goldfeder wrote in the email to Chandler. “Sandy victims must be a priority and sadly at DOB, that doesn’t seem to be the case.”

Goldfeder made a point in his message to praise Queens DOB officials, who he said have done a “great job” working through the backlog. Still, Goldfeder suggested that DOB place additional staff within Build it Back to supplement the work of the borough office and help “navigate and deal with ancient violations that are preventing progress.”

DOB has made Sandy victims a priority, Chandler shot back, adding that the agency has committed “significant resources” to help speed recovery efforts.

Constituents that have reached out to Goldfeder and staff have reported lengthy construction delays due to red tape, including buildings permitting issues. Multiple Build it Back applications have been hampered by open permits and unresolved violations. Many of these cases, Goldfeder noted, appear to be clustered in Queens communities like Broad Channel, Hamilton Beach and Breezy Point, where unique housing stock characteristics and proximity to protected wetlands have stalled rebuilds.

“Actions speak louder than words and after three years of red tape from the Department of Buildings, we expect real results,” Goldfeder said on Monday. “Our recovery will not be complete until every family is safe and secure, back in their own home.”

A Buildings spokesperson told The Forum on Tuesday that Sandy victims have been at the top of the list since the end of 2012.

“Helping New Yorkers displaced by Sandy rebuild and return home safely is a priority for the Buildings Department. DOB has more than 50 staff members dedicated to supporting the Build it Back program, and we are increasing staffing levels in Queens to guide homeowners and help resolve any outstanding issues. Working in close coordination with the Housing Recovery Office, DOB staff is also assisting with plan examinations and project sign-offs,” according to the spokesperson.

In the meantime, Assemblyman Goldfeder pledged to help Cardinale and other families struggling to recover from Superstorm Sandy. With a large portion of the city’s Build it Back applicants in his district and with many still waiting to return home, Goldfeder considers resolving Sandy permitting issues the next big step in the community’s recovery from the 2012 storm.