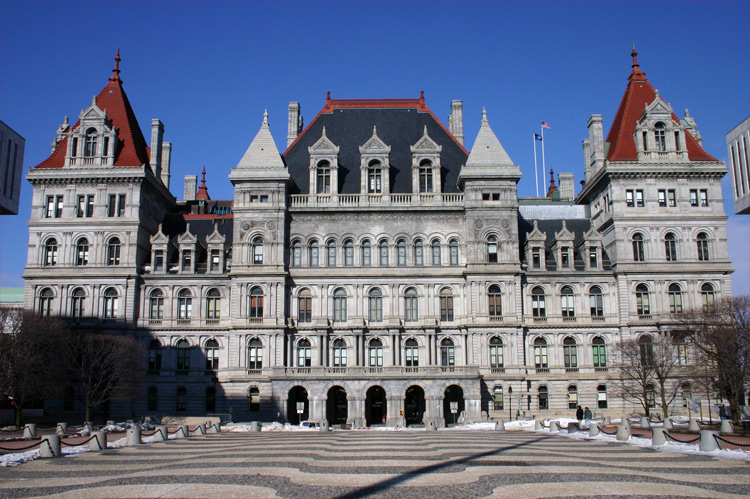 PHOTO: Both houses of the State Legislature have passed budget resolutions. Photo Courtesy of Citizen Action of NY

With the April 1 deadline for the Empire State to adopt a 2016-2017 spending plan fast approaching, the Senate and Assembly on Monday passed one-house budget resolutions.

The Upper Chamber announced that it had passed a 2016-17 budget roadmap to a responsible and on-time spending plan that will help make New York a more affordable place to live, work, and raise a family. The Senate proposal restrains state spending, provides significant new tax savings for hardworking middle-class taxpayers, and invests in the shared priorities of New Yorkers and their families.”

Senate Republicans said the “highlight” of the resolution is the new Middle Class Income Tax Relief Program that establishes the lowest middle class tax rate in more than 70 years. Starting in 2018, a total of 5 million eligible taxpayers would begin to see savings. When fully implemented in 2025, middle class New Yorkers will pay a 25 percent lower tax rate and save $3.5 billion in taxes each year.

Other focal points of the Senate side include a property tax cap for New York City “so taxpayers can begin to see the savings the rest of the state has been afforded.”

Without a tax cap, the property tax levy in New York City rose 7.7 percent in 2014. Property taxes increased by 6.3 percent over the last two years, and conservative estimates project an average increase of 6 percent in each of the next three years.

The Senate budget proposal includes a year-to-year 7.15 percent school aid increase of $1.655 billion; a total of $167 million to strengthen heroin and opioid abuse prevention, treatment, recovery, and education services; and eight-year term limits for leadership positions in the Senate and Assembly.

In announcing The Lower Chamber’s $156.7 billion budget proposal, Assembly Speaker Carl Heastie and Assemblyman Herman Farrell, Jr., chairman of the Ways and Means Committee, said it would “address the needs of many hard working New Yorkers and their families across the state by including funding for resources necessary to care for their loved ones, secure an education for their children and access to opportunities they need to achieve economic success.”

The Assembly’s plan includes a seven-year extension of mayoral control of City schools; $2.1 billion increase in school aid from the 2015-16 budget; raising the income tax rate for the highest earners, or those earning $1 million or more annually, which Heastie and Farrell said would generate more than $2 billion over the current tax rate structure in annual revenue to support schools, aging infrastructure and other public priorities.

Mayor Bill de Blasio stamped his approval all over the Assembly plan.

“Speaker Heastie and the Assembly just passed a budget resolution that will uplift New Yorkers across the five boroughs, from our public schools to our public housing and our public hospitals.

“Investments in rental assistance, housing, foreclosure prevention and more would mean that the City could further expand our efforts – already the most comprehensive in the nation – to tackle the homelessness crisis.

“The Assembly’s budget proposal would also protect City taxpayers from devastating cuts to CUNY, Medicaid and sales tax revenue, and we will continue to ensure that the final State budget will not charge the people of NYC one penny more in additional costs.

“In the coming weeks, we will continue to work with the Legislature and governor to enact a budget that will move these priorities – and 8.5 million New Yorkers – forward,” de Blasio pledged.