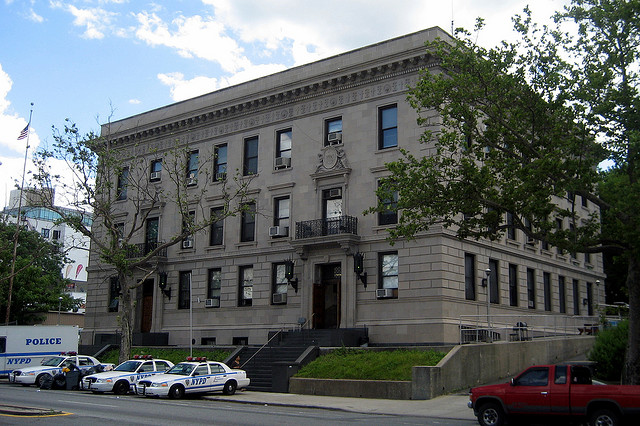 PHOTO: Besnik Llakatura, one of Nikolla’s co-defendants, was a City police officer who worked out of the 120th Precinct (stationhouse pictured.) Courtesy of Flickr/Wally Gobetz

A Brooklyn man has pleaded guilty to federal extortion and gun charges, according to the Eastern District U.S. Attorney’s Office, for his role in a multi-player plan to coerce “protection” payments from several Astoria business owners.

Denis Nikolla last Thursday copped to two counts of Hobbs Act extortion conspiracy, one count of threatening physical violence in furtherance of an extortion plan, and one count of brandishing a firearm. One of his co-defendants, Besnik Llakatura, who served as a City cop on Staten Island during the charged crimes, previously pleaded guilty in this case, U.S. Attorney Robert Capers noted.

According to court records and Nikolla’s allocation, between May and November 2013, Nikolla, Llakatura and another man conspired and attempted to shake-down an Astoria restaurant owner, demanding regular payments in exchange for so-called protection. The extortion began shortly after the victim opened the eatery, when he was visited by Nikolla and told that he had set up shop in “our neighborhood” and, as a result, “you have to pay us” $4,000 per month.

The restaurant owner sought help from his friend Llakatura. However, Llakatura, an NYPD officer serving the 120th precinct since 2006, was conspiring with Nikolla in the extortion. Llakatura actively discouraged the restaurant owner from going to the police and sought to leverage his position of trust as a friend and a police officer to persuade the victim that he had no choice but to make the demanded payments, warning the victim that Nikolla and his associates would harm him if he did not pay, according to federal prosecutors. When the victim resisted, Nikolla threatened him with physical violence and chased him at gunpoint down a borough block. Over the course of five months, each of the three defendants took turns collecting monthly payments from the Astoria restaurant owner, ultimately collecting $24,000 in shake-down payments.

In April 2012, Nikolla and Co. attempted to extort $400 a week from the owner of two borough nightclubs. After he refused to pay, Nikolla stuck a gun in the owner’s ribs, and informed him that if he wasn’t paid, Nikolla would come to the owner’s house and beat him up in front of his wife and children.

Also in 2013, Nikolla, Llakatura, and the co-defendant conspired and attempted to extort the owner of two Astoria social clubs. Nikolla made the initial extortion demand, seeking payments of $1,000 per week from the proprietor for “protection.” The owner refused to make the demanded payments and ceased going to his social clubs out of fear for his safety.

Court-authorized wiretaps of the defendants’ telephones revealed evidence of Nikolla’s participation in this extortion conspiracy with Llakatura and the other perp, and their attempts to locate the victim. In one instance, according to the U.S. Attorney, all three threatened, punched, and pulled a gun on a friend of the victim in an effort to make the friend locate the victim. The victim ultimately fled to a foreign country for a period of time to avoid the threats.

When sentenced, Nikolla faces up to life in prison and a mandatory minimum sentence of seven years.