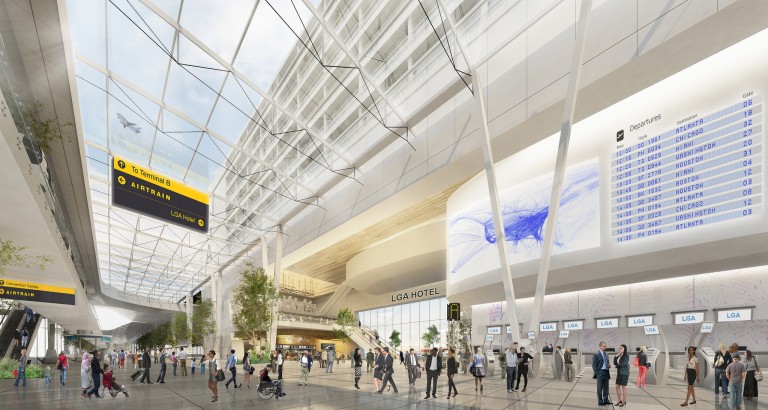 The Port Authority of New York and New Jersey’s Board of Commissioners last Thursday voted unanimously in favor of authorizing $2.9 billion for LaGuardia Airport’s new Terminal B, which the agency has called a “21st Century project” that will serve as a “gateway to the metropolitan region.”

Gov. Andrew Cuomo characterized the vote as “a critical step forward” in the long-awaited overhaul of the much-maligned airport.

“Our plan will fundamentally transform LaGuardia – replacing what is now an outdated and poorly designed complex with the world-class airport New York has always deserved,” Cuomo added. “This represents a major milestone for the project – the first of many – and I look forward to seeing construction begin later this year.”

Last week’s tally approves a lease with LaGuardia Gateway Partners, a private consortium, to build and operate a new state-of-the-art Terminal B, with a central hall and concourse that will create a unified airport as well as the site for an Air Train station.

The lease clears the way for the first phase of Cuomo’s redesign plan, which he announced last July with help from Vice President Joe Biden, who once infamously derided the borough-based hub as “some Third World country.”

“New York had an aggressive, can-do approach to big infrastructure in the past—and today, we’re moving forward with that attitude once again,” Cuomo said last summer of the project that’s expected to create 8,000 direct jobs, 10,000 indirect jobs, and cost north of $4 billion.

Under a public-private partnership, two-thirds of the design and construction cost will be paid for by private financing and existing passenger fees. LaGuardia Gateway Partners will design, build, operate and maintain the facility. The risk of cost overruns or schedule delays in the LaGuardia project will be transferred from the Port Authority to LGP, a private airport developer that, Cuomo noted, was selected and approved in May 2015 by the Port Authority Board after a competitive request-for-proposals process.

“Approval of the lease with LGP is both the first major step toward Gov. Cuomo’s modernization of LaGuardia Airport and the largest public private partnership for new transportation infrastructure in U.S. history,” said Port Authority Executive Director Patrick Foye. “The transaction brings private capital and expertise to an airport in desperate need of investment, and shifts the risks of complex construction in an operating airport environment from the Port Authority to well-capitalized private parties.”

The redesign plan will completely rebuild Terminal B, and construct a central hall and connecting concourse that will turn the airport into a single main terminal with expanded transportation access, increased taxiway space and passenger amenities. The design reflects the recommendations from Cuomo’s Airport Advisory Panel, including the new light-filled Central Entry Hall, which will connect Terminals B and C and unify the airport for the first time. By moving the terminal closer to the Grand Central Parkway, it will increase airport taxiways and reduce ground delays. In addition to the new terminal and Central Hall, LGP will also construct new roads, utilities, runway improvements, a new West Parking Garage and other supporting infrastructure, according to the redesign plan.