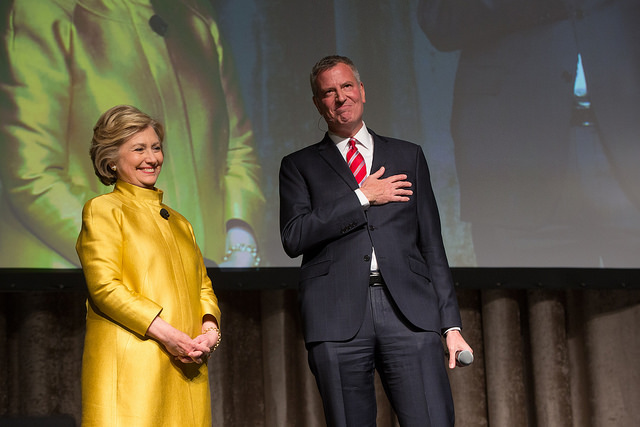 Hizzoner is throwing “caution” to the wind.

In a skit performed (badly) at a black-tie dinner last weekend, Mayor Bill de Blasio said he’d been “on CP time” in initially hesitating to endorse Hillary Clinton, his former boss, in her run for President. Clinton responded (as part of the act she says de Blasio wrote) and said he must mean “Cautious Politician time.” Alrighty then.

In using the phrase to begin with, and subsequently, in defending it as a joke, de Blasio has offended a lot of people. With good reason.

“CP time” apparently stands for “colored people time,” and if you say “he’s on CP time,” it’s supposed to mean (we now know) that someone is late (or perpetually late), because in this stereotype, African-Americans are said to be late often. As even writing those words feels horrific and foreign to us, we are incredibly thankful that, prior to this controversy, we had no idea what they meant or even why it would be an actual thing people say. It’s not that we’re trying to be PC (politically correct). We just don’t think that way.

And, for that reason, we don’t find the mayor’s “joke” remotely funny. Remember when Jerry Seinfeld tells the priest he’s not offended as a Jew but, instead, as a comedian when someone he knows converts to Judaism in order to justify making Jewish jokes? We’re offended at de Blasio’s idea of humor, not because we think he’s a racist, but because he shouldn’t be kidding around about being a “cautious politician.” Isn’t this like the perpetually late pot calling the kettle “black?”

People aren’t upset because they think de Blasio doesn’t like people “of color.” How could he not? His family is black. Let’s get something straight here. What’s upsetting, for starters, is that his aforementioned “cautiousness” – or what we’d prefer to call out as his disloyalty to Clinton – is remarkably unfunny, as is his frequent tardiness. Lastly, and most importantly, joking about stereotypes might work for some seasoned comedians (though, arguably in this case, we doubt even the great Chris Rock could pull this off), but as a political leader and someone who has decried, numerous times, racist behaviors and statements, de Blasio simply doesn’t have the right. Maybe he thinks he does because his family is multiracial. But need we remind him that racists, bigots, and homophobes get creative when it comes to finding excuses for their hatred, and when they hear others (particularly those in the public eye) use racial stereotypes and epithets, they think that it justifies when they do? Come on, DBlaz. Haven’t you heard of leading by example?

And we don’t like his response to criticism about the joke, either. If you’re going to have the chutzpah to reference such an absurd stereotype in the name of humor, at least then have the gravitas to apologize for it plainly afterward. In an election year as important as this one, everyone is just plain tired of the many games politicians play trying to pussyfoot their way out of mistakes. The ones that don’t beat around the bush are the ones doing well right now, regardless of party or platform.