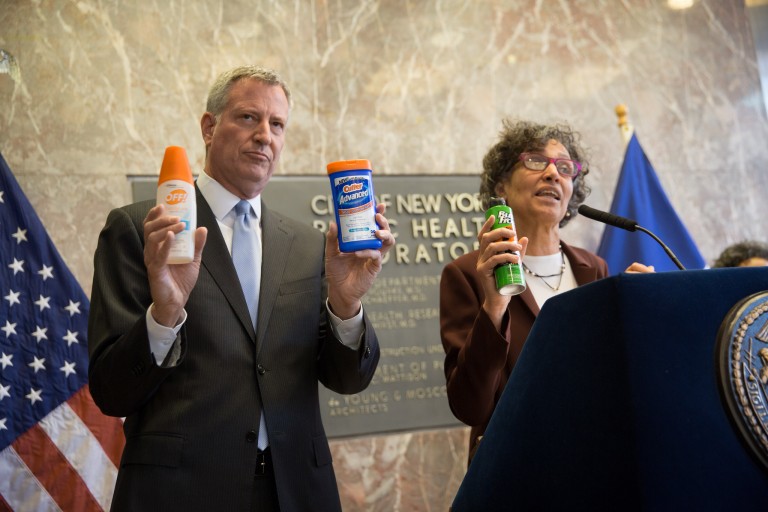 Marking the start of mosquito season, the administration has announced a three-year, five-borough plan to protect New Yorkers and prevent the spread of the Zika virus in New York City.

Building on the Health Department’s West Nile virus mosquito control program, the plan expands mosquito surveillance and control to identify and target mosquitoes that could potentially transmit the Zika virus; creates capacity to meet a growing need for testing pregnant New Yorkers and local mosquitoes for the virus; and disseminates prevention and testing information throughout the city. The plan will add 51 new positions to address needs – including inspectors, exterminators, disease inspectors, and lab analysts – and it will double the number of mosquito traps placed across the city. Zika investment totals $21 million over a three-year period, including a State match.

The City’s Incident Command System – an internal organization structure deployed during emergency situations – was activated in February, after the World Health Organization rang the alarm about the Zika outbreak. The Zika Action Plan was informed by the latest scientific evidence, conversations with the Centers for Disease Control and Prevention, and advice from clinical and mosquito control experts who participated in two high-level consultations convened by the City over the past two months.

“We are doing all we can to target the mosquito that could transmit Zika here in the city, and building the capacity to respond to every possible scenario, no matter how unlikely,” said Mayor Bill de Blasio. “We will spare no effort to protect pregnant New Yorkers from the devastating consequences of Zika, and we ask New Yorkers to help us by taking simple steps to get rid of standing water where mosquitos can breed. We also ask pregnant women who may have been exposed to Zika to talk to their doctors about getting tested.”

Expanded clinical services include increased testing of women who visited an affected area while pregnant as well as care management. The Health Department will coordinate the distribution of free insect repellent to pregnant women by working with clinicians and community health providers.

The department is also expanding its capacity to trap, test, and report about mosquitoes in NYC and the viruses they may carry. Enhanced surveillance will help the City quickly detect and respond to locally transmitted cases. The Aedes aegypti mosquito causing the Zika outbreak in Latin America has never been found in New York City, but nevertheless there is concern that a similar species, Aedes albopictus, could carry and transmit the virus if it bites a New Yorker who was originally infected elsewhere. Enhanced mosquito abatement will include 1) breeding ground control, which eliminates standing water, and 2) larviciding, which kills the adult insects. Additional traps will be placed where the Aedes species is found in large numbers.

A $1.2 million citywide public awareness campaign on buses, subways, TV, and radio with the tagline Fight Back NYC has been launched to remind residents of the steps they can take to reduce and prevent mosquito bites. In addition, the Health Department has scheduled more than 200 community outreach events across the city to disseminate information about travel warnings, mosquito prevention and available testing, with a particular focus on neighborhoods with high mosquito activity and on communities with large numbers of immigrants from countries affected by the Zika outbreak.

Additional information can be found at nyc.gov/health/zika.