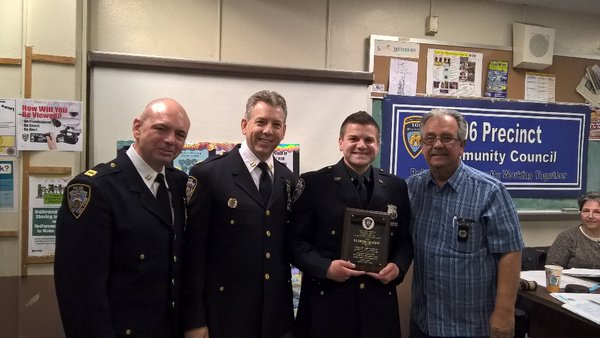 Cop of the Month Michael Callahan relied on his street smarts and smartphone last month to snare a suspect with a lengthy rap sheet who was wanted in connection with an Ozone Park home-invasion robbery, according to Capt. James Fey, commanding officer of the 106th Precinct.

On Saturday, March 25, around 5 a.m., Callahan and two Anti-Crime Unit officers responded to the scene of the robbery in the vicinity of 134th Road and 96th Avenue. After taking statements from some of the five victims, Callahan and his colleagues had determined that three armed suspects entered one bedroom of the residence and pistol whipped and tied two of the victims’ hands together, then entered another room and pistol whipped a victim, breaking his nose.

Callahan and Co. then broadcast descriptions of the assailants, along with details of the items that were taken, including $15,000 cash, several watches, two iPhones snatched from victims, and other valuable possessions.

Already familiar with iPhones and their technology, Callahan entered one of the complainant’s Apple ID information into the Find my iPhone application on his smartphone.

“Fortunately, the officers received a hit – the phone was still turned on,” Fey noted.

Callahan traced the phone to 151st Avenue and 78th Street in nearby Lindenwood, where they observed a man duck behind a parked car. Upon investigation, the officers discovered the man was in possession of the phone, an additional iPhone, a Social Security card belonging to one of the victims, and a credit card belonging to another victim.

The perpetrator, Fey said, has been arrested 14 times, including for two felony assaults last year and first-degree robbery.

Bail was set at $250,000. As of Wednesday afternoon, the suspect was still in custody on Rikers Island.