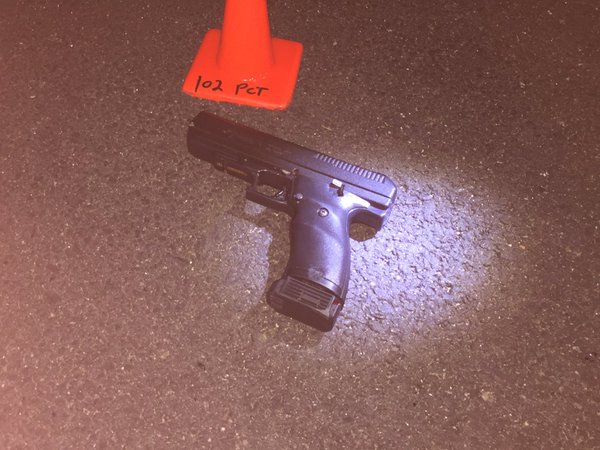 PHOTO: A .40-caliber Hi-Point Firearms handgun was recovered at the scene of Sunday’s fatal shooting. Courtesy of NYPD

Four cops shot and killed an armed man who reached for his weapon after attempting to evade arrest early Sunday morning in South Ozone Park, according to the NYPD and published reports.

The 106th Precinct police officers fired a total of 13 rounds at George Tillman, 32, at 135th Street and 116th Avenue around 1:30 a.m. The father of five was rushed to Jamaica Hospital Medical Center, where he was pronounced dead. It was unclear how many slugs Tillman’s body absorbed.

The officers were not injured, but were taken by ambulance to Northwell Long Island Jewish Medical Center for treatment and evaluation, the department said.

According to investigators, the incident began when two plain-clothes cops driving an unmarked car southbound on 135th Street encountered a double-parked SUV with Tillman standing next to it, holding an open bottle of alcohol. As the officers approached him, they noticed a firearm in his waistband. The cops then “attempted to engage” Tillman, who in turn fled the location.

A foot pursuit ensued, investigators said, during which verbal commands were given to Tillman. As the suspect approached the corner of 135th Street and 116th Avenue, a second unmarked department auto, with three members of the 106th Precinct inside, encountered Tillman there. As he was confronted by the officers, Tillman reached for his firearm. Four officers then discharged their service weapons.

A .40-caliber Hi-Point handgun was recovered at the scene of the shooting.

A man who billed himself to the New York Post as a friend of Tillman’s told the paper that the cops shot Tillman in the back as he attempted to flee.

“He was trying to run away, and he had his back turned,” the friend said. “He didn’t have no gun on him. What he did was run.”

The department indicated this week that the investigation remains ongoing.