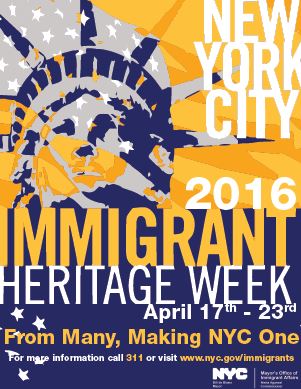 PHOTO: The theme of Immigrant Heritage Week 2016 is “From Many, Making NYC One.” Photo Courtesy of Mayor’s Office ofImmigrant Affairs

The initiative, which was announced by Mayor Bill de Blasio during the city’s Citizenship Week of Action in September, supplies the services and counseling at 12 library branches alongside assistance available at select Human Resources Administration sites.

“For centuries, immigrants have been an integral part of the fabric of our City,” said Department of Social Services Commissioner Steven Banks. “As we celebrate their strengths and history and acknowledge the many contributions immigrants have made, we also renew our commitment to ensure that immigrants are given access to all the resources and services they need to succeed in this country.”

The theme for Immigrant Heritage Week 2016, April 17 through April 23, is “From Many, Making NYC One,” and includes events and programs across the five boroughs designed to recognize and celebrate the history, traditions, and contributions of NYC’s immigrant communities. The selected dates are in recognition of April 17, 1907, when more immigrants entered the country through Ellis Island than any other date in U.S. history.

According to MOIA, there are approximately 650,000 immigrants in the city that are lawful permanent residents but have not taken the next step to become U.S. citizens. Increasing immigrant access to citizenship through NYCitizenship “is a powerful tool for fighting poverty and supporting the economic empowerment and civic integration of foreign-born New Yorkers,” the agency added.

A recent study commissioned by MOIA and supported by Citi Community Development showed for the first time that cities directly benefit when they work to increase rates of naturalization. The study found that if all eligible NYC residents naturalized, the City would see a net economic benefit of $823 million.

“Our city was built by immigrants, and immigrants remain our city’s heart and soul,” said Public Advocate Letitia James. “This week, we take extra time to recognize and celebrate our immigrant communities. As individuals running for our nation’s highest office spew xenophobic rhetoric, I remind immigrants that in New York, we will never stop working to provide fair and equal opportunities for all.”

To make an appointment, New Yorkers can call 311 and say “citizenship appointment,” call the NYCitizenship Hotline at (212) 514-4277 or visit nyc.gov/nycitizenship.