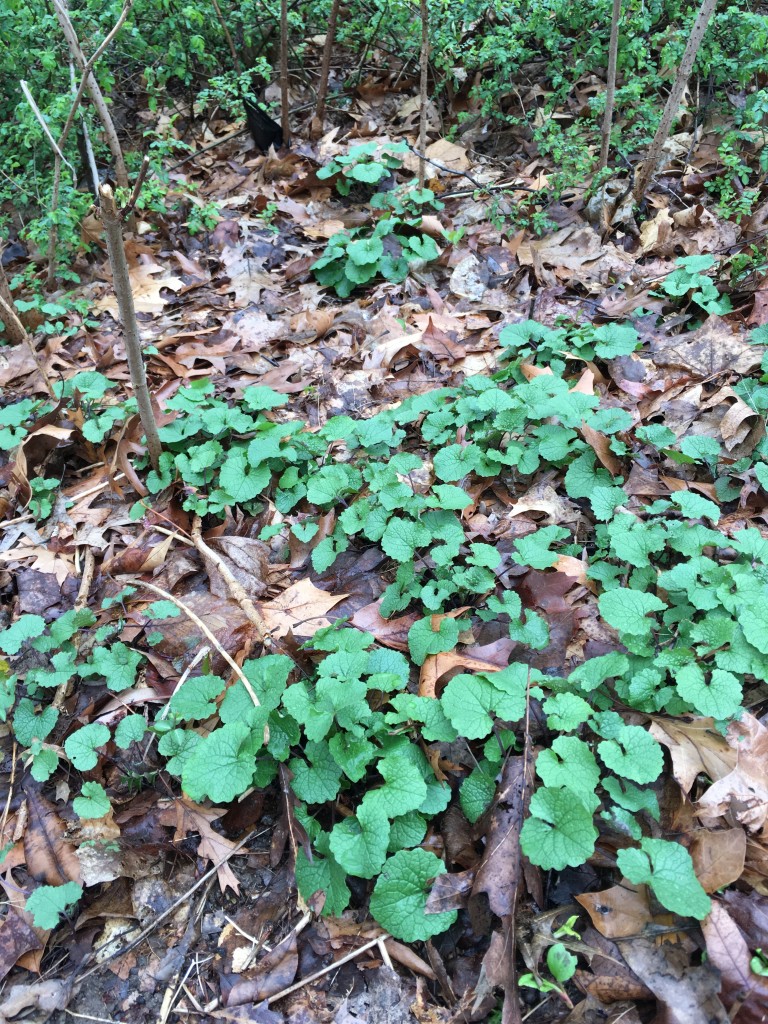 PHOTO:  This patch of garlic mustard in Forest Park remained (mostly) intact after The Forum cleared it for our own forager’s feast.  Forum photos by Eugénie Bisulco

Leda Meredith knows how to find a good meal. No, she’s not a restaurant critic or a food blogger or a travel writer. First and foremost, she’s a forager.

What does it mean to forage, especially in the middle of a city as city-like as New York? Not to be confused with dumpster diving for packaged or commercial food products, urban foraging is all about finding what’s living near or in parks, abandoned lots, yards, or even public beaches — and taking it.

That’s not to say that foragers pillage nature. In fact, they do it a great service, because many edible plants are considered invasives; that is, if left unchecked, they will simply take over, possibly doing harm to native species.

Leda Meredith’s newest book, The Forager’s Feast, came out last week. She calls herself “a lifelong forager,” though she was once a professional ballet and modern dancer.

Meredith was a success as a professional dancer before she found a career in foraging. She earned a certificate in Ethnobotany from the New York Botanical Garden and now teaches, creates recipes, and writes about her foraging finds. Her latest book, The Forager’s Feast, was made available last week on Amazon.

Before we’d even entered Forest Park, she had spotted two or three edibles. The first was the ever-present dandelion, which in this time in early spring is fine raw in salads, adding a mild bitterness that complements sweeter greens. Meredith whipped out a pocketknife and demonstrated a quick-harvest method: slicing through the root just under the dirt. While the leaves are young and there are not as yet open flowers, the whole plant and its root, which Meredith fondly refers to as “yard squid,” can be battered with light tempura or put in a stir fry.

Two minutes later, we’d spotted dock, field garlic, mugwort, and garlic mustard, all prime for picking.  Garlic mustard is better than store-bought mustard or kale greens, especially at this young stage, and can be harvested year-round. In a few weeks the flower buds that sprout from it (think broccoli rabe) can be plucked and sautéed. The roots, small and stringy, can be finely chopped and used in the same way that horseradish is used. Conveniently, the root lifts slightly out of the ground like a handle, so simply hoist it and the whole thing will come out. But if sustainability is normally a concern, in this case it shouldn’t be; the Parks Department regularly requests volunteers to remove such “weeds.” If you don’t feel like traipsing through a park, you’ll probably find many growing in your own backyard.

Meredith also pointed out several plants that would yield harvestable parts later in the season. 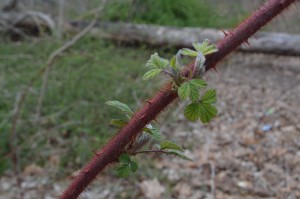 Expert foragers encourage mapping out parks and coming back for future harvests. Seen here is the unmistakable “orangutan fur” of wineberry brambles growing with abandon in Forest Park. The fruit will be ready to pick in July.

“When I teach kids, I divide them into three categories: gatherers, mapmakers, and calendar makers, and we plan when and where to come back. They learn that you don’t just walk into the wilderness to find food.” Rather, you mark the wineberry bushes along the path and return in July, when their orangey-red fruit (similar to raspberries and blackberries) will be ripe. Or you find elderberry bushes, whose flowers are harvestable in June and fruit (good for wine) can be plucked in August.

The crude paths were nearly overwhelmed by Multiflora Rose bushes still carrying tiny rosehips (high in vitamin C) from last season. With the plethora of plants there, it wouldn’t take long to gather enough to make delicious tea. One whole patch had been blackened by fire (probably a controlled burn, managed by Parks, in order to take out the invasive species), but nature always wins this battle, and small leaves at the base of the dead brambles were beginning to poke out.

Weather damage was also evident, as those plants sparked to burgeon by warmer temperatures had indeed emerged and then nearly died.  Meredith excitedly harvested a couple of Japanese knotweed stalks, which can be made savory or sweet much like rhubarb, but noted they’d been badly thwarted by the recent freezes. No matter, she said. They’d bounce back in a few weeks.

As our tour of just one tiny part of Forest Park (just south of the bandshell) drew to a close, we counted our haul – nine plants in total harvestable today and four to come back for later. In addition to the aforementioned plants, we’d found huge acorns past their prime, flowering crabapple, honeysuckle yet to bloom – as any kid knows, the flowers are tasty – pine trees, the “marginally edible” lesser celandine (which must be cooked), and daylilies. Most are described in detail, with photographs and preparation suggestions, in Meredith’s extensive Northeast Foraging, published in 2014.

A sauté of tender garlic mustard greens, field garlic, and a few dandelion plants thrown in for good measure all made for a delicious, free, and fully sustainable meal.

We were putting the crate of mustard greens in the car when Meredith took off across the parking lot.

“I think those are Juneberries over there!” she exclaimed with fervor, sounding like a tried-and-true forager.