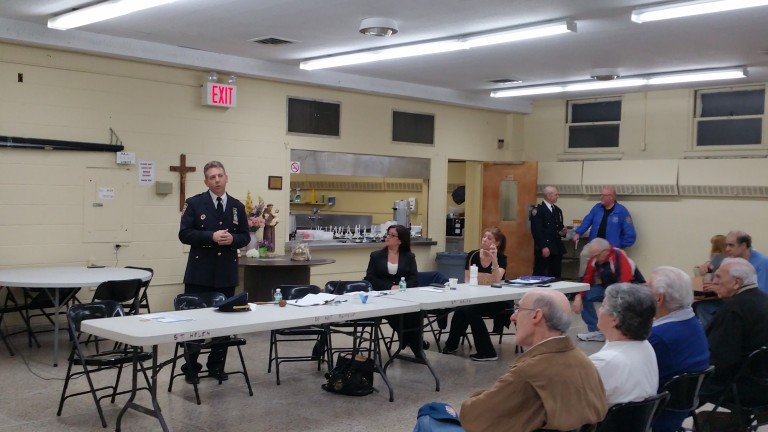 The four police officers who shot and killed an armed suspect last month in South Ozone Park were visibly distraught in the hours after the incident, according to their commanding officer.

Offering a rare glimpse into an authority’s coping process following a police-involved shooting, Capt. James Fey, CO of the 106th Precinct, detailed what he observed when he met the officers who were being evaluated at Northwell Long Island Jewish Medical Center.

“[The cops] were very upset,” said Fey, who cut short a camping trip with his kids and rushed to the emergency room after he was notified. “It was clear to me that they had been crying. They were in shock – [they] just took someone’s life.”

Fey also discussed the events and actions leading up to the death of George Tillman, a Maryland resident who was visiting family in Queens that weekend. The incident began early on Sunday, April 17, around 1:30 a.m., when two plainclothes cops driving an unmarked car southbound on 135th Street encountered a double-parked SUV with Tillman standing next to it, holding an open bottle of alcohol. As the officers approached him, Fey said, Tillman, 32, handed the bottle to a friend. Extending his arm to complete the transfer caused Tillman’s shirt to lift up, allegedly revealing a firearm tucked in his waistband. The cops then “attempted to engage” Tillman, but he turned and fled the location on foot.

A foot pursuit ensued, during which verbal commands were given to Tillman. As he approached the corner of 135th Street and 116th Avenue, a second unmarked department auto, with three members of the 106th Precinct inside, encountered Tillman there. As he was confronted by the officers, Tillman allegedly reached for the handgun. Four officers then discharged their service weapons, firing a total of 13 rounds. The father of five was rushed to Jamaica Hospital Medical Center, where he was pronounced dead.

A .40-caliber Hi-Point handgun was recovered at the scene.

Tillman’s family has decried the shooting as unjustified, insisting that he was unarmed. Their lawyer has asked state Attorney General Eric Schneiderman to lead an investigation into the matter.

“Please say a prayer for [Tillman’s] family, but also for my officers,” Fey said last week at the Howard Beach-Lindenwood Civic meeting. “They put their lives on the line every day.”