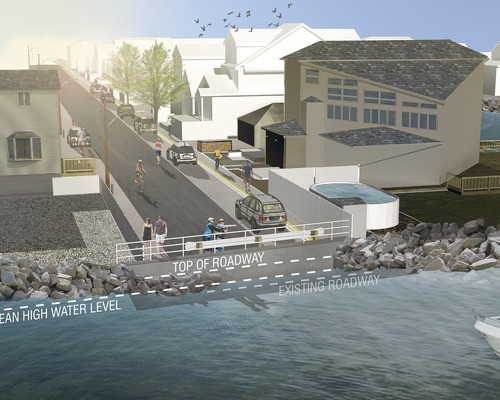 Queens Borough President Melinda Katz this week was effusive in her praise of the Broad Channel Street Raising Task Force’s stewardship of the project that will elevate West 11th through 19th roads to help protect the community from flooding caused by high tides from Jamaica Bay.

“This is one of the best working Task Forces I’ve seen,” Katz said on Monday. “The agencies involved have been doing a tremendous job in remaining coordinated and prioritizing the community’s needs. They, the contractor, the designer and the community are all to be commended for working together and ensuring that the agreed upon goals are met, disruptions and inconveniences to the community are kept at a minimum, and timelines remain on track.”

The $28 million Broad Channel Street Raising Project, which began in August 2014, is a two-phase reconstruction endeavor under the city Department of Transportation and managed by the Department of Design and Construction. It involves the raising of streets through a “shared streets design” process borrowed from the Netherlands, where roadways and sidewalks are elevated to the same level with only the color of the pavement serving to differentiate the roadway from the sidewalk.

The first stage involves the raising of West 11th through West 13th roads – the streets identified as most vulnerable to flooding; on track for anticipated completion by June 2017, as originally scheduled. According to DDC, work has commenced on 11th and 12th roads and is anticipated to be completed by the end of this year; work on 13th Road will begin this fall.

The second part of the project will cover the raising of West 14th through West 19th roads. According to the RBA Group, the project’s design firm, drawings will be submitted to DDC this week and presented to the community in June. The design stages will conclude in early 2017, with the project anticipated for completion by the end of 2020.

Broad Channel Civic Association President Dan Mundy, Jr. this week told The Forum that he, too, feels that “we are making very good progress on the Street Raising project. I attribute much of the success to the involvement of the borough president and her task force meetings. They have been critical in bringing together the stakeholders, the agencies, and the contractor to address issues and resolve them as they come up.”

EIC Associates, the project’s contractor, reported that this week they will begin repaving areas of the Broad Channel American Park parking lot that are most prone to flooding. The repaving is pursuant to an agreement with the community in return for EIC Associates utilizing a portion of the lot as a staging area during construction to store vehicles and equipment. EIC has also committed to repaving the occupied portion of the lot when both phases are completed.

The Mayor’s Office of Housing Recovery Operations has indicated that Superstorm Sandy recovery efforts under the Build it Back program would be impacted by the Street Raising project. HRO and DDC reported that they continue to coordinate in order to minimize the delays to the elevations of Build it Back homes.