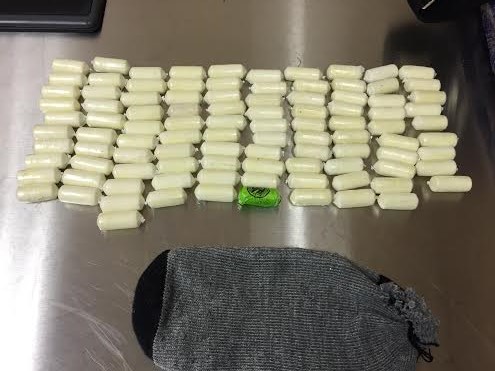 The accused smuggler was allegedly caught with approximately 9 pounds of cocaine. Photo Courtesy of U.S. Customs and Border Protection

U.S. Customs and Border Protection officers last week nabbed a passenger at John F. Kennedy International Airport for attempting to smuggle a large amount of cocaine into the country via a tube sock and a computer bag.

According to federal authorities, CBP officers intercepted passenger Angelo Fernandez, a United States citizen arriving on a flight from Santiago, Dominican Republic. During his examination, officers noticed that his carry-on computer bag was heavier than normal when empty, and that the inside panels felt unusually thick.

Fernandez was then escorted to a private room where CBP officers conducted a personal search and a rigid object was allegedly discovered in his groin area. It was a sock containing 100 pellets of white powder, which tested positive for cocaine. Additionally, cocaine was allegedly found in Fernandez’s computer bag.

The total weight of the seized cocaine was approximately 9 pounds, with an approximate street value of $160,000.

Fernandez was arrested for the importation of a controlled substance and turned over to U.S. Department of Homeland Security Investigations. According to Federal Bureau of Prison records, he is being held at Metropolitan Detention Center Brooklyn.

“This seizure demonstrates the vigilance and dedication demonstrated daily by CBP officers at JFK, in keeping these prohibited and dangerous narcotics off the streets of our communities,” said Robert Perez, director of CBP Field Operations in New York.