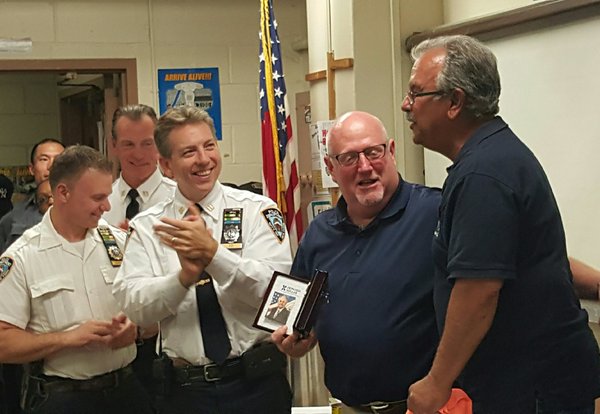 After a distinguished 25-year career with the NYPD, Det. Kenny Zorn, the longtime Community Affairs officer for the 106th Precinct, has announced he is retiring.

“Working in this community was an honor,” Zorn said last week at the 106th Precinct Community Council meeting.

“Detective Kenny Zorn will be sorely missed here at the Precinct, but more so by the Community he served,” said Capt. James Fey, commanding officer of the 106. “For the last 16 years, Kenny has been assigned to Community Affairs in the 106, and I doubt anyone ever did the job better. Kenny knows more about the neighborhoods that comprise the 106 Precinct – from physical layout, to the residents and store owners, to the varying cultures of the people we serve. You can say that Kenny is as knowledgeable a local historian as he is a detective. I am very lucky that Kenny decided to help me through the first three months of my tenure with the command; his knowledge and advice proved invaluable.”

Zorn walked into the 106 Precinct’s Ozone Park stationhouse in October 1991—and never left. The borough native was assigned to Community Affairs in February 2000, and earned the promotion to detective roughly three years later.

Zorn’s partner, Det. Brenda Reddick, addressed the veteran personally in this note she sent to The Forum:

“Kenny, I’ve been the longest partner you’ve had, and it’s been a great nine years,” Reddick wrote. “It’s going to take some time to get adjusted to working with someone new, but I wish you all the luck in the world. You are a very intelligent individual with unique talents (a walking almanac.) To whom much is given, much is required. Enjoy retirement – you so deserve it.”

Zorn and his wife live on Long Island with their three children.

Congratulations, Kenny! Thank you for your service.