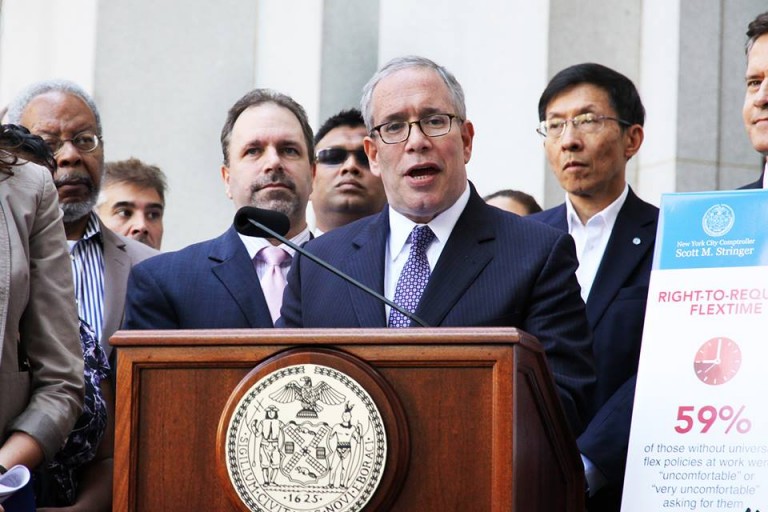 PHOTO: Comptroller Stringer last week said that even though the city’s economy continues to expand, signs indicate a ‘cooling’ is on the horizon. Courtesy of Office of City Comptroller

New York City’s economy grew significantly faster than the national economy during the first quarter of this year, according to City Comptroller Scott Stringer, who also identified harbingers of a looming fiscal slowdown last week as he released the Quarterly Economic Update.

Strong gains in private-sector payroll jobs helped the Big Apple’s economy expand by an estimated 3.4 percent over the first three months of 2016, Stringer noted. But signs of a cooling economy emerged as average hourly earnings in the private sector were flat and venture capital fell for the first time since 2012.

“The City’s job market was a bright spot in the first few months of 2016 as more New Yorkers joined the workforce, but there are signs of a slowdown on the horizon,” Stringer said. “More City residents than ever before are now employed, but too many of the jobs we’re gaining are in low-wage industries. When New Yorkers work full time and still can’t afford a decent living, it undermines our entire economy.” 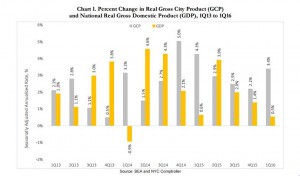 The Update’s first-quarter findings include:

The city’s economy, as estimated by Gross City Product, grew at a 3.4 percent annual rate in the first quarter of 2016. While the past two years began with similarly divergent rates, Stringer noted, over the course of those years, the gap in growth narrowed.

Additionally, the number of city residents working or looking for a job soared, according to the Update. About 32,000 residents joined or rejoined the labor force, the highest quarterly increase in 12 years.

Of the total 41,700 private-sector payroll jobs added in the first quarter, nearly half were in low-wage industries, according to the report, and 36 percent were in mid-wage industries. All major sectors expanded except for the high-paid financial activities sector.

Venture capital investment in the New York metro area fell 6.2 percent to about $1.4 billion in the first quarter of 2016, the first year-over-year decline since 2012, Stringer noted. Nationwide, venture capital investment fell even faster, leading the New York metro area’s share of investment to grow to 11.3 percent in the first quarter of 2016 from 10.7 percent in the final quarter of 2015. Quarterly city personal income tax revenues fell 0.3 percent on a year-over-year basis, driven by a 28 percent increase in tax refunds. The steep increase in refunds was offset by modest growth in taxes withheld from paychecks and estimated payments, Stringer explained.

A decrease in financial sector bonus payments contributed to relatively weak first quarter personal income tax collections. Wall Street bonuses are estimated to have been $23 billion in the 2015 bonus season, 16 percent lower than $27.5 billion in 2014, and the lowest level since 2011. Lower bonuses coincided with a 10.5 percent drop in Wall Street profits in 2015.

Manhattan’s vacancy rate for commercial property fell to 9 percent, the lowest first-quarter level since 2008. Vacancy rates in Midtown South dropped to 6.3 percent this quarter from 7 percent in the first quarter of 2015, as Midtown overall and Downtown recorded smaller declines.

“We’ll be keeping an eye on these economic indicators and continuing to focus on enacting policies that ensure every New Yorker has a fair chance to share in our city’s growth,” he added.