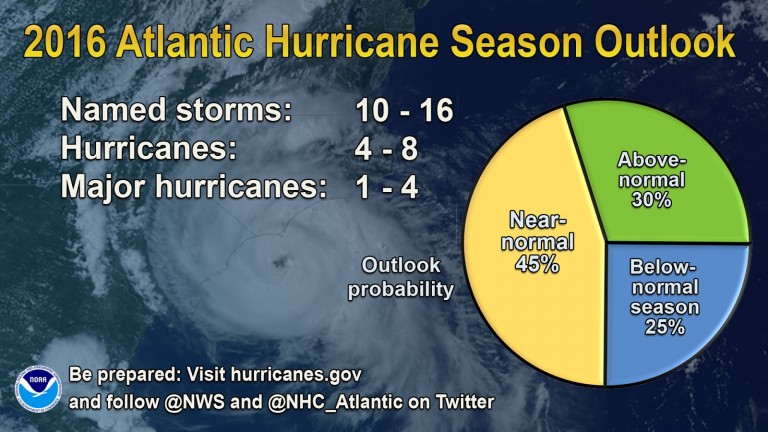 Graphic Courtesy of the National Oceanic and Atmospheric Administration

Prior to 2012, June 1, for most city residents, was just another date on the calendar.

That was, however, life before Superstorm Sandy – before Mother Nature tore a hole in parts of the Big Apple, including southern Queens and Rockaway, forever altering the everyday for some and creating a new normal in which the first day of June is the first day of Atlantic hurricane season, not simply another box on a calendar.

The National Oceanic and Atmospheric Administration last week issued its 2016 hurricane season (June 1 – Nov. 30) forecast. The term will most likely be “near-normal,” according to the NOAA Climate Prediction Center, but forecast uncertainty in the climate signals that influence the formation of Atlantic storms make predicting this season particularly difficult, the agency added.

“This is a more challenging hurricane season outlook than most because it’s difficult to determine whether there will be reinforcing or competing climate influences on tropical storm development,” said Dr. Gerry Bell, lead seasonal hurricane forecaster at the Climate Prediction Center. “However, a near-normal prediction for this season suggests we could see more hurricane activity than we’ve seen in the last three years, which were below normal.”

“As our Hurricane Forecast Improvement Program turns five, we’re on target with our five-year goal to improve track and intensity forecasts by 20 percent each,” she said. “Building on a successful supercomputer upgrade in January, we’re adding unprecedented new capabilities to our hurricane forecast models — investing in science and technology infusion to bring more accuracy to hurricane forecasts in 2016.”