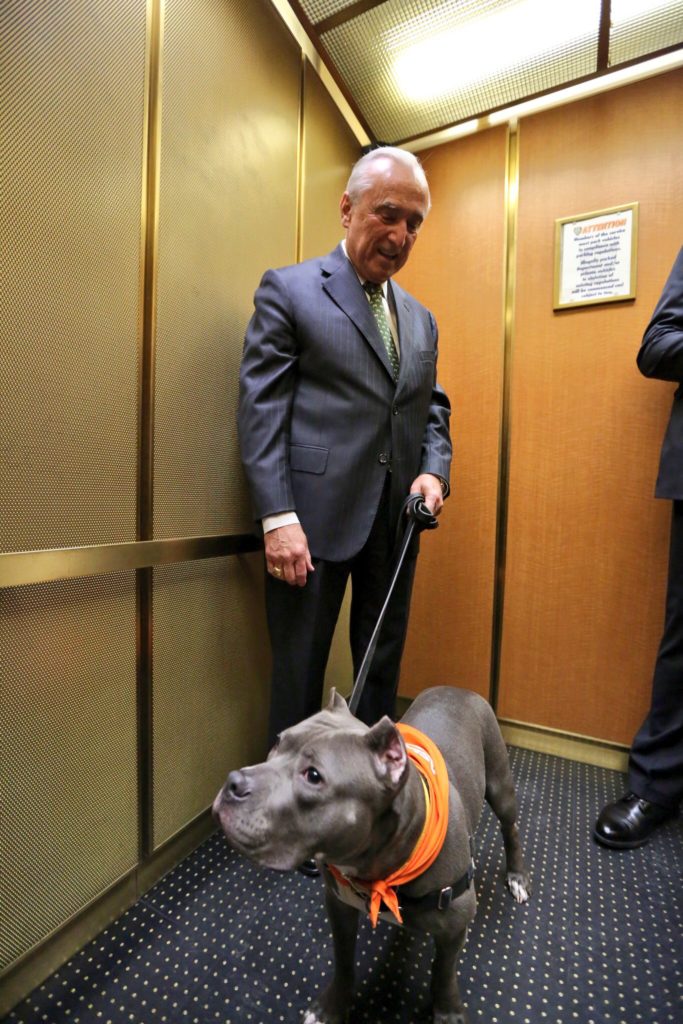 The animated film “The Secret Life of Pets” is slated for worldwide release on Friday, July 8. According to Illumination Entertainment and Universal Pictures, it’s “a comedy about the lives our pets lead after we leave for work or school each day.”

“The Secret Life…” is light-hearted, PG fare. So you undoubtedly will not hear about the secret life of Zaza.

Zaza was one of two dogs rescued by officers from Brooklyn’s 63rd Precinct in April. She was bone-thin when police discovered her living in filthy conditions with another underweight, female pit bull mix. Zaza was suffering from an infection in both ears that caused severe swelling and a skin infection between her toes.

But thanks to the work of the NYPD and the ASPCA, and volunteer organizations across the city, innocent animals like Zaza are given a fighter’s chance to survive and eventually make a full recovery – and escort Police Commissioner Bill Bratton around 1 Police Plaza.

Bratton joined the ASPCA last Friday in highlighting the importance of pet adoption by inviting Zaza to join him on the job at NYPD Headquarters for Take Your Dog to Work Day.

“Today’s visit from Zaza highlights the success of the NYPD’s partnership with the ASPCA that has been proven by the countless animals saved throughout New York City,” Bratton said. “The Department’s Animal Cruelty Investigation Squad was created in 2014 to have NYPD detectives lead investigations into animal cruelty cases that has resulted in an increase in arrests and rescues. With the use of the Crime Stoppers program, one of our newest tools to fight animal cruelty, the public can now easily and anonymously provide information about animal abuse.”

Since the partnership launched citywide in January 2014, there have been triple-digit increases in arrests and animals treated.

“The NYPD/ASPCA partnership has saved hundreds of animal victims from suffering in silence,” said Howard Lawrence, vice president, ASPCA Humane Law Enforcement. “It is incredibly important that New Yorkers continue to report animal cruelty and open their hearts and homes to dog and cat cruelty survivors, like Zaza, who deserve a second chance for a loving, stable home.”

Zaza is up for adoption. She’s ready for a light-hearted, PG life.