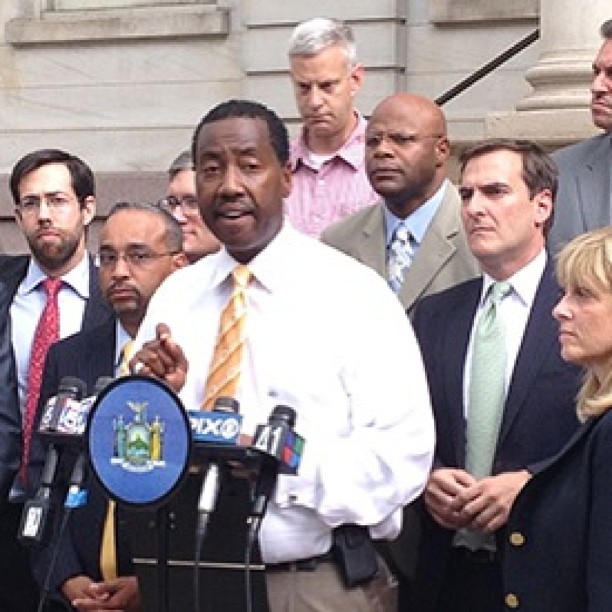 A federal grand jury last week handed up an indictment of Norman Seabrook, former president of the Correction Officers’ Benevolent Association and an influential figure in City politics, for allegedly demanding and accepting bribes in exchange for investing $20 million of union money in a Manhattan-based hedge fund.

Seabrook, 56, was arrested a month ago along with Murray Huberfeld, 55, a founder and part-owner of Platinum Partners hedge fund. According to U.S. Attorney Preet Bharara, Huberfeld allegedly paid Seabrook $60,000, and promised future bribe payments, in exchange for Seabrook’s investment of $20 million of COBA money in Platinum Partners.

COBA is the city’s largest correction officers union and the largest municipal jail union in the country.  It represents more than 9,000 correction officers in the five boroughs, including at Rikers Island. Until his June 8 arrest, Seabrook had been the union’s president for more than 20 years. According to Bharara, Seabrook’s power over the affairs of COBA was rarely questioned by his Executive Board due to his ability to affect their assignments, pay, and hours.  Seabrook’s control extended to the union’s finances, including the administration of its “Annuity Fund,” a retirement benefits program funded by the City that invests more than $70 million for correction officers’ retirements.

According to the complaint, toward the end of 2013, on a trip to the Dominican Republic with, among others, an individual who is now a cooperating witness for the government, Seabrook told the witness that he worked hard to invest COBA’s money and was not getting anything out of it, and it was time that “Norman Seabrook got paid.”

The feds’ witness was friendly with and had done business with Huberfeld, and was aware that Platinum was looking to attract public and institutional investors – as opposed to its more typical investor set of high net-worth individuals – and told Huberfeld that Seabrook would likely invest union money in Platinum if Huberfeld were willing to pay Seabrook cash. Huberfeld agreed to the proposition and worked out a formula in which Seabrook would be paid a kickback of a portion of the profits from COBA’s investment that Huberfeld estimated could be between $100,000 and $150,000 per year.

“As alleged, Norman Seabrook and Murray Huberfeld engaged in a straightforward and explicit bribery scheme,” Bharara said. “For a Ferragamo bag stuffed with $60,000 in cash, Seabrook allegedly sold himself and his duty to safeguard the retirement funds of his fellow correction officers. Norman Seabrook, as COBA’s president for over two decades, allegedly made decisions about how to invest the nest egg for thousands of hard-working public servants, based not on what was good for them, but on what was good for Norman Seabrook.”

“This kind of criminal collusion destabilizes the system and undermines investors’ confidence in the integrity of the marketplace,” added FBI Assistant Director-in-Charge Diego Rodriguez.