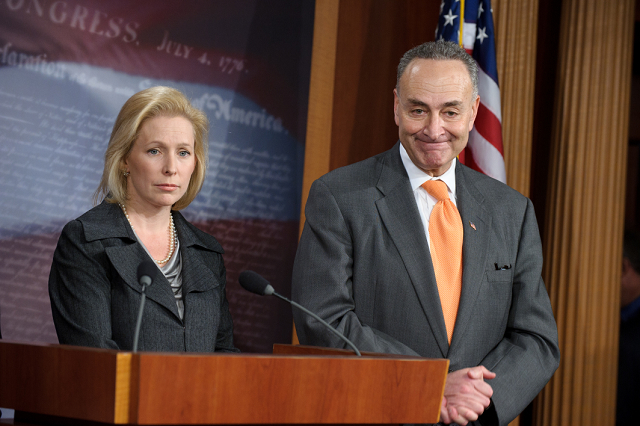 Currently, the Federal Aviation Administration oversees such issues. However, Schumer and Gillibrand said that they feel that the EPA is better fit to address noise pollution because airplane noise can greatly impact the environment and individual quality of life.

“Communities in the New York- metro area have long struggled with incessant airplane noise caused by the highly-trafficked skies above and it’s time we set up an office dedicated to tackling this issue head on,” Schumer said. “Airplane noise is a major quality of life issue and that’s why it makes sense for the EPA to take the lead role in addressing these matters. This legislation will once again set up an Office of Noise Abatement and Control at the EPA so that environmental experts can address airplane noise.”

Schumer’s and Gillibrand’s bill, “The Quiet Communities Act of 2016,” restores the EPA’s control over airplane noise matters and reestablishes a dedicated office of noise abatement.

Due to budget cuts in 1981, the EPA’s Office of Noise Abatement and Control was dismantled and the FAA was given oversight into all matters regarding aircraft noise pollution.

The legislation was introduced by Rep. Grace Meng (D-Flushing) in the House of Representatives. Under the proposed law, the EPA would conduct research on the impacts of noise and provide technical assistance and grants to communities to mitigate noise. It would also require the Office of Noise Abatement and Control to carry out a study on airport noise, examining FAA noise-measurement methodologies, the threshold of noise at which health impacts are felt, and the effectiveness of noise mitigation measures at airports.

“The federal government must take more proactive steps to address the concerns of New Yorkers who are affected by airplane noise, and this bill will give the EPA the ability to act,” said Gillibrand, a member of the Senate Environment and Public Works Committee.

Schumer and Gillibrand noted that they have long supported measures to help address the issue of airplane noise in airport communities. Specifically, the senators successfully pushed for a hotline phone number for airplane noise complaints. And, after Schumer’s urging, New York directed the Port Authority to hold regular roundtable discussions in collaboration with FAA representatives and other affected parties regarding issues at the two major New York airports. Schumer has urged the Port Authority and FAA to install additional noise monitors at airports and use the data collected to make decisions about changes to flight patterns. Earlier this summer, the senators urged the Port Authority of New York and New Jersey to complete its Part 150 noise studies as quickly and thoroughly as possible so that it can begin taking noise mitigation steps.

The Part 150 studies aim to evaluate noise impacts to the communities surrounding JFK and LaGuardia Airport and, once complete, Schumer and Gillibrand said that the studies will recommend measures to mitigate excessive noise where possible.