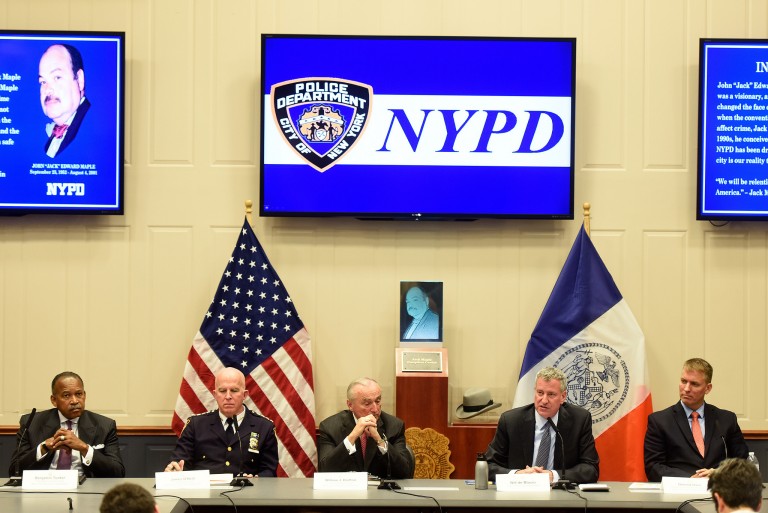 Violent crimes continue to decline across the five boroughs, according to the City Police Department’s latest available statistics.

“We are witnessing the confluence of the peace dividend and precision policing in New York City,” declared Police Commissioner Bill Bratton. “Shootings continue to fall precipitously, as do overall arrests. Our takedowns are undermining even the most obstinate criminal enterprises however, contributing to a double-digit rise in gun arrests. These results, coupled with the continued expansion of the NCO program, ensure the NYPD is at the forefront of a new policing model that fosters a city that is safe and fair, everywhere for everyone. I want to commend the men and women of the department for their ongoing dedication and excellence.”

“This month’s record low shootings are clear proof that NYPD’s precision policing is working,” said Mayor Bill de Blasio. “With 11,000 fewer New Yorkers arrested while crime continues to drop, NYPD has proven we can use precision policing to hone in on the few individuals responsible for the majority of crime in our city. Thanks to the hardworking women and men of the NYPD, New York City remains the safest big city in the nation. And we will continue to maintain this progress while strengthening the relationship between police and community. Once again, the NYPD has demonstrated we have the most sophisticated and talented police force in the country. I want to thank Commissioner Bratton, Chief of Department [Jim] O’Neill and the entire NYPD team for their unwavering commitment to keeping our city safe.”

Prior to the July crime briefing, Bratton noted that last Thursday marked the 15th anniversary of the death of Jack Maple, deputy commissioner for Crime Control Strategies during Bratton’s first run as the city’s top cop. The Richmond Hill native is widely credited with creating and developing CompStat, the crucial law-enforcement strategy tool the NYPD uses to track patterns and proactively fight crime. In 2014, Bratton renamed the CompStat Room the Jack Maple CompStat Center.

“Jack’s book was appropriately titled ‘Crime Fighter’ – that’s the greatest accolade that you could give to Jack Maple, was that he was a crime fighter – a crime fighter extraordinaire and we’re all the beneficiaries of that unique skill; all the criminologists in the world, everybody who studies crime – none of them compared to that guy because he understood it better than any of them,” Bratton said. “So, today, we commemorate and celebrate an extraordinary life that benefitted this extraordinary city.”